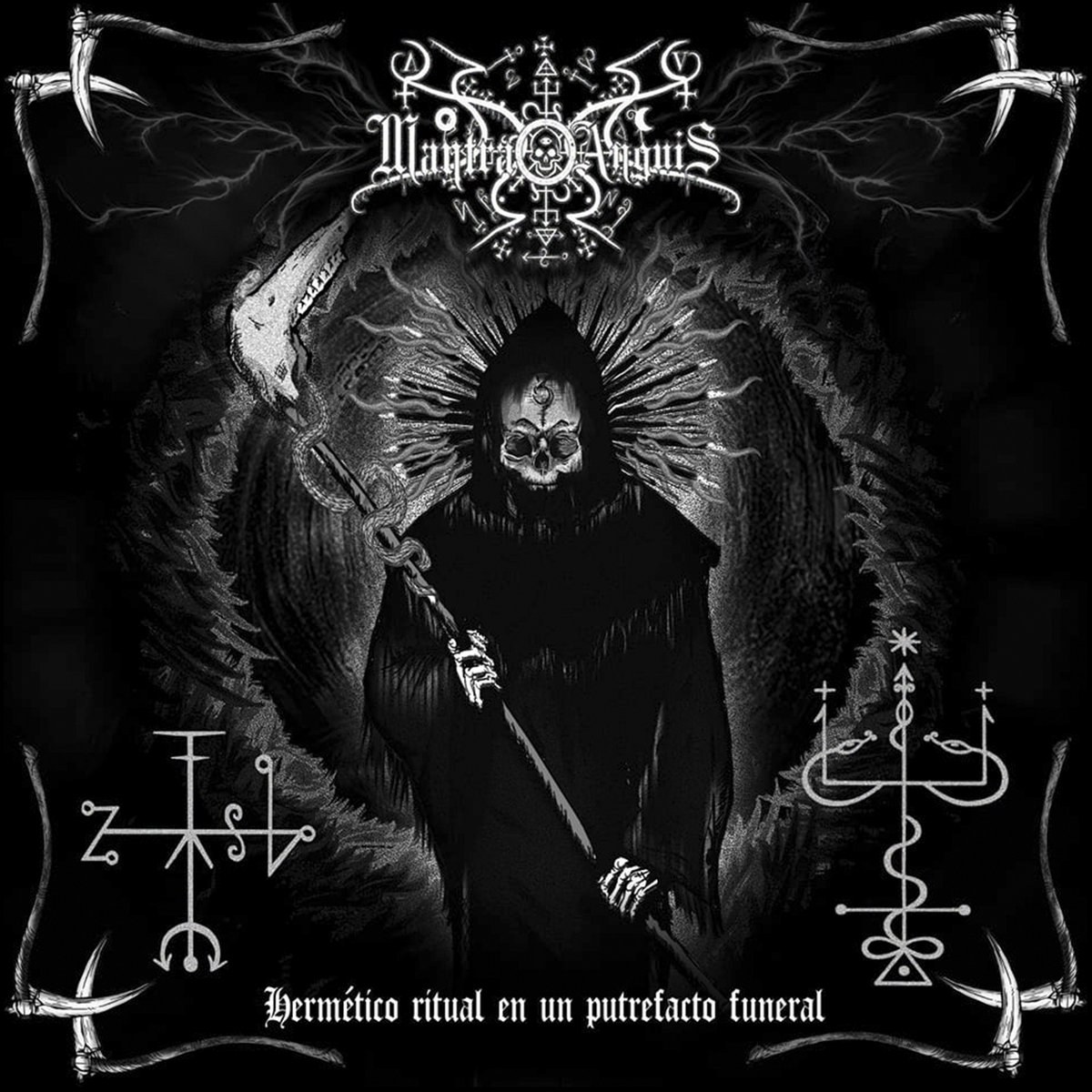 I wonder, what am I talking about at the beginning of this review? Well then I am going to make a small introduction regarding the founding member of Mantra Anguis, the main band vocalist called XIII is none other than the formerly named Sargathanas, and I say above because before thinking about forming the band, this musician already had a journey in the underworld of Black Metal as a composer, guitarist and especially vocalist of some Black Metal bands in Colombia, among them the forgotten UnholyBlood (2007-2008), NOX (2016-) and others like UR in its beginnings (2004-2009) and Innomini Satanas (2009-2015). In this last mentioned band Sargathanas or XIII was the composer, guitarist, vocalist and leader, and coincidentally in the year of dissolution of Innomini Satanas (year 2015) Mantra Anguis was born, and according to data from the web this last band would be a continuation with name change of the previous one, but there is really no direct statement from its founder on the web that affirms such an aspect. Therefore, we see how the history of this musician in the world of Black Metal is before 2015.

At last, I will fully talk about the first album by Mantra Anguis (Col) entitled “HERMÉTICO RITUAL EN UN PUTREFACTO FUNERAL”, translating into English would be something like Hermetic Ritual at a Rotten Funeral, and the one that surrounds the title is an interesting matter as It seems a tradition in some bands to title works with such extensive names and we could refer to songs by Dark Funeral (Swe) and Judas Iscariot (USA) with titles "Dark Are the Paths to Eternity (A Summoning Nocturnal)" for the first and " But Eternals Beheld His Vast Forests ... ” for the second respectively, in the case of Mantra Anguis the long title is the one that gives name to the album itself.
February 2021, on that date the Compact Disk in Jewel Case format is released, it is known that before the disk was released, many people in local scene already knew the band through concerts in which it has participated since 2015, and many of these followers were already eager to finally know a production that had been announced previously, however, there was a year of delay due to public health issues that everyone knows. And what if the wait was worth it.

The album begins with a solemn intro, sounds of airplanes at war and in the background the impressive Sarabande in D minor by George Frederick Handel, and we are ready for the surprise beating, without even playing the drums we listen to Hastur with an electric guitar Distorted riff execution of four bars in tone of E making use of the inevitable tremolo picking technique so fundamental for this type of music, already at the fifth beat the noise of a possibly 16-inch crash cymbal enters with which Nahual the drummer begins to destroy our ears with their fast drums. It is quite surprising for those who already knew the work of the vocalist in previous projects because this time he does not hear himself doing the brutal Harsh Vocals that he was used to, in exchange for this in Solar Vortex which is the first track XIII he executes in the whole song a throaty/guttural voice in the style of classic Death Metal. In a technical sense, the other characteristic of the sound with which they introduce us is the prevailing reverb FX in the recording, mainly in the vocals, in the drums and in some passages of the guitar.

Of the seven songs on the album only two have lyrics in Spanish, HERMÉTICO RITUAL EN UN PUTREFACTO FUNERAL is one of them, absolutely Luciferian and magical the lyrical intention in this song, for Latin listeners it is quite pleasant to hear those words and accents, musically it's rich in rhythm and atmospheres, going from frenetic parts to slow and gentle parts, with a fast ending with a deep riff on high notes and the “Veni-Veni-Qayin”, great.

In general, the lyrics of the album are in English, this is the case of TIAMAT'S AWAKENING, a song of almost six minutes in length, where you can see the band’s dogma, mentioning the ancient Sumerian god the snake Tiamat, precise for lovers of history in satanic theology. TRANSMUTATION is one of those precise songs when you go in the middle of the album and have not yet decided to finish it and the song change your mind, you can find in this song quite melancholic passages led by a clean guitar in F # arpeggios in a Slow Moderate rhythm accompanied by a guitar Solo balanced to the right channel, nice end of this song. Leaving the nostalgic journey behind, we move on to ERMITAÑO, which is the other track with lyrics in the Spanish language, aggressive and explosive enough, with a drums doing the same rhythm all the time, a tribute to those minimalist raw black metal drums. DESCENDING TO THE VOID, in the second half of the album shows us an abysmal, dreamlike and nocturnal facet in the band's lyric, totally classic theme, they do not forget the deep feelings that inspire this black art, speed, dark melody, a voice a bit more ragged than in the beginning of the album.

There are still eleven minutes of music left and just one song, what ?, eleven minutes ?, will it be worth ?, mmm, because for me it is the best song on the album, they close great, INEXORABLE FATE, it has nothing to do with the boring minimalism of many bands, this is a very long song but with a lot of musical content, it shows the lack of laziness when composing, nothing to do with those long and boring songs, ever; ohh “So, this is how it feels? / The end of this mortal life! / Now my place lies / far beyond the stars!”, and we already entered the end of the song and the album, the first time I heard this , I wanted to repeat it over and over again, one of the best guitar arrangements that I have heard in Colombian Black Metal, oh what a sad and nostalgic thing, that guitar solo really moved me, fortunately I already had the opportunity to say it personally to Hastur, master. Epic song.

Ending. Highly recommended for those who want to know about the Colombian Black Metal Underground. In a general sense, the sound work is technically superior to many of the productions that we are used to in the Colombian underground, however if we get demanding the work of the sound technician, mixer and masters it seems a generic work and with some eagerness, I say it for small details that I heard in a little particular mixes. For that reason alone, I don't give it a higher rating. Score 94/100.

One of the Colombian black metal albums sadly that easier went into oblivion in this year 2021, absolutely undervalued, but one of the most exalted works of local black metal, definitely in Colombia there is much more offer of bands than the old bands of the 90's. Great compact disk.