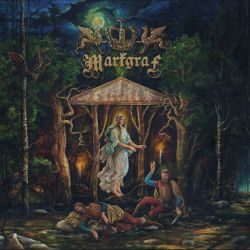 Arghhhhh! It's albums like this that give us hope! You can't kill the underground when bands like this exist!

If you take the mad dramatic vocals of King Diamond, and mix it with the gritty, dirty, doomy riffs of Cirith Ungol (or even some War Metal acts!), with a little sprinkle of 80s Heavy Metal solos, and ta-da!

In short, this album is one of the weirdest mixes I've ever encountered. There's a lot of Doom, a lot of old school 80s Finnish and Swedish Death Metal, a lot of Mercyful Fate, and a bit of Eastern epicness to it as well.

The riffs and the overall guitar sound on this album are by far it's most magnificent feature. It has the same thick tone as the old school War Metal acts such as Beherit (early days Beherit of course) or more modern stuff like Abysmal Lord.

The drumming is probably the most primitive aspect of the whole album, in a way that the other performances sound almost technical compared to it! But you know what!? The drumming on this album is one of the most pure and organic I've ever heard! What a beautiful mix!

Highlights? I seriously can't pick one track! They are all epic! It kills me that great albums such as this never get the reception they deserve! The Metal scene is a bitch!

I wonder what they think of Markgraf