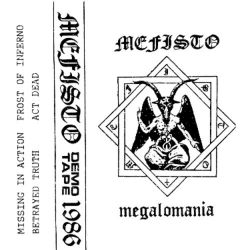 Not another Bathory clone, but a forgotten classic!

If you look at the band logo and the overall imagery of the covers on these two hugely influential demos, you may think: "Oh Yeah! Another Stockholm band going for the Bathory sound!". But actually, NO! These two demos are incredibly unique, and almost share nothing with early Bathory! (although, Bathory and Mefisto had some slight connection and supported each other in those days!).

When you first hear the hook and solo part of the first song, you can easily feel the unmissable

Tormentor vibe going on. But since Tormentor released those influential demos in '87 and '88, we have to conclude that Tormentor was influenced by this band in some ways! (the similarities between the first Tormentor demo and these two releases are quite obvious if you ask me!)

Well, enough with the history analogy, let's get to the bottom of this release!

One of the major points that will blow your mind on these two releases are the vocals (definitely!). They sound evil and incredibly obscure.

The next thing you will notice are the extremely catchy, thrashy Riffs. You have to remember that 1986 was the golden year of Thrash Metal, and this is reminiscent of that golden erA f I had to choose one Thrash Metal band to compare the riffs to, I would probably go with

Kreator (especially in the case of "Betrayed Truth"). There is the same kind of half-note riffs with the same techniques when it comes to the harmonies.

As for the production, you would be surprised by how good it is! Even though these two releases are considered demos, their production is way better than early Destruction albums for instance! Easily. Everything is audible and to the point.

My favourite song from this album (and this band!) must be the incredible "Frost of Inferno". It starts with a sexy acoustic/reverb-stenched guitar intro which is reminiscent of old school

Sepultura. The riff is extremely badass and sick, and the vocals on these songs sometimes become "disturbing"!

The guitar solos here are mostly reminiscent of the melodic-but-scorching solos from obscure European Speed/Thrash bands, or even classic Metal bands of the 80s!

Overall, these two demos are cartoonishly underrated and you should definitely treat your ears with their beautiful sounds! Recommended? Hell yeah!

No comments yet.
Leave a comment
for 'Mefisto (SWE) - Megalomania'