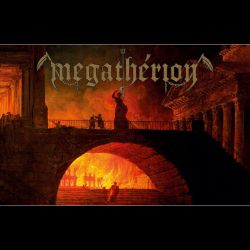 The perfect soundtrack for any possible riots in Salem!

Germany’s underground scene is probably one of the most awesome ones!it has all the colors in the spectrum of Black metal from Thrash to Pagan Black metal covered in a badass manner!

Cruel Force. As you may guess from their band name, this band is a heavily

Celtic Frost/Hellhammer inspired band (and a very good one at that!). But you can hear little influences from other First wave bands such as


This was their first and so far only release. It's very short and for the most part doesn't really offer outstanding performances but it does not betray the 80s one bit!

The intro reminds me of the intro from one of my absolute favorite German Thrash albums, Power of Darkness by

Minotaur. Then we are bombarded with two Bathory worshipping tracks namely 'Secret Invocations' and 'Invading the Crypts'. The thumping Bass lines create an adrenaline release on their own. This guys bass work was interesting on his previous band

Eurynomos and nothing has changed about that quality.

Generally, there are a lot of similarities between this band and

Cruel Force vocalist "Carnivore". His Lower and more monotonous approach does sacrifice rhythm of the songs to some extent but overall the outcome is great.


The next track is ‘Built For Sin’ which is arguably where we see the thick influence of Tom Warriors on these guys the most! but all of these tracks are shit compared to the albums closing statement 'Burning Arrow'. GODDAMNIT! what an incredible track. Honestly this song is so badass that makes someone lazy as me turn on the computer and write a review about a forgotten EP from a sideproject band! it's dark, gloomy fast and above all perfect for starting Riots on the streets of Salem! it's madness!

Ultimately, the riffs of the album are not as twisted and dark as Tom Warrior's and Slayer were. Not as wild and aggressive (for the most part) but the cool, old-school vibe of the thing and its suitable hooks and nuances, together make it a good release of the black metal of the old union!
So although there is still plenty of room for improvement for the debut album, this is currently their only offering for those who thirst for the black fires of

No comments yet.
Leave a comment
for 'Megathérion (DEU) - Megathérion'