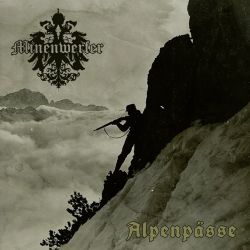 ¨Through meadows and hilltops, the alps are your death...¨

Where do I start? This album takes me to fascinating places musically speaking. From the first seconds you know that you are about to experience something totally out of the ordinary and it's an experience that I continue to have since the first time I listened to it.

¨Der Blutharsch¨ is simply masterful. The almost 20 minute long epic keeps hitting you in a very stylish way. Varying between melodic passages to some just brutal and heartbreaking, this song sits on the same table as songs like ¨Black Rose Immortal¨. Goosebumps all the time.

¨Dragging the Dead Trough Mountain Passes¨ reminds us more of the Minenwerfer from the first two albums but that's not a bad thing by any means. A song in the purest style of that Black Metal that doesn't stop suffocating you through the whole runtime of the song.

We get to the middle of the record with ¨Cloaked In Silence¨. A song where I think it's a perfect mix between that melodic Minenwerfer and the one that is totally head crushing. As I previously said, goosebumps all the time.

¨Kaiserjägerlied¨ offers us a merely melodic and beautiful Black Metal, with one of the most magical acoustic interludes that I've ever heard in my life and which climax is a scream that gives us the creeps but at the same time (and sorry for sounding repetitive ), yeah, GOOSEBUMPS.

The album reaches its ripe point and we are close to the end with “Tiroler Edelweiss”, a one hundred percent acoustic ballad that might sound out of place on paper, but makes perfect sense within the narrative and style of the album. It's the melodic break that the listener needs and which beauty always takes me to the alps that are the protagonists of this album's artwork cover. My favorite acoustic song of all time.

The album closes with Withered Tombs, which despite the fact that in my opinion it is the weakest on the tracklist, it doesn't stop working as a perfect closure for the epic journey of sound sensations that we have just been part of. Brutally melodic, which is the adjective that encompasses the entire album.

What else can I say? An album that any fan of Black Metal and especially of the atmospheric and melodic branch should listen to. An album that already has a certain cult status and that put Minenwerfer on the map quite deservedly. I can't wait for the next album from this talented duo. Thank you for reading.