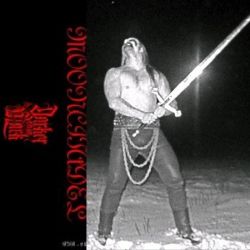 As Nightwind Embraced and the Shadows Caressed

Don't be fooled by the shitty album cover!

If you judge this album by it's cover, you should be ashamed of yourself!

I'm gonna go straight to the point, this demo is one of the best releases in recent times! If we had to invent a new sub-genre for this release it would probably be "Majestic Black Metal", because it's Majestic (and then some!).

The riffs are incredibly catchy and melodic. At some points, it reminds you of Graveland (or even Bathory's Viking era!). At some points it becomes a heavily tremolo-picked Norwegian classic! By far the best thing about this demo is the epic atmosphere that it creates. It paints a picture of a desolate winter-torn plain in a very long night.

The highlight of this release is easily the third track, "When Thousand Winters Bury My Heart". What a beautiful melody, it almost sounds like a symphonic Black Metal song, but in a primitive and epic way!

Talking of epic, we must steer your attention to the final song here, "The Earl of Nightfall". This almost reminds you of great NSBM / Pagan Black Metal bands like Nordreich or Bilskirnir. The keyboards here are not for added atmosphere, but to create an epic layer to picture. The bass on this track is also incredible.

All in all, a very pure album that is disguised as a demo! Check it out!

0 Comments
for 'Mooncitadel - As Nightwind Embraced and the Shadows Caressed'

No comments yet.
Leave a comment
for 'Mooncitadel - As Nightwind Embraced and the Shadows Caressed'