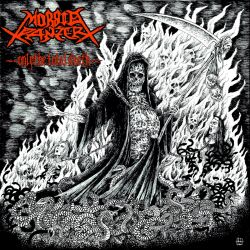 Only the Total Death

The combination of Thrash Metal and Black Metal existed right from the early 80s. These genres co-existed in the times of Venom's proto-Thrash days and beyond. When these two started to be separated from each other in the mid to late 80s, they still had influence on each other, and turned each other on with their differences.

In the late 80s, some bands started to mix these two up in the old school Venom fashion, with the aggression from Thrash. Bands such as Morbid (Sweden), Sabbat (Japan), Necrodeath (Italy), and so on...

I personally always loved this fusion, it just works and feels very natural, because basically both of these styles were meant to be like this, but different movements started to make them their own sound and trademark by changing them!

Here we have a fantastic effort from the short-lived German band, Morbid Panzer. What an organic sound. What a badass collection of catchy riffs and bass lines! The vocals pretty much remind me of Sabbat and Venom, but the rest of it is pretty much their own signature and worth listening to every millisecond of it.

The only thing that sucks is the fact that after this release the band split up, and we ended up with just two badass songs from them and a massive thirst for more! If this was a full-length I would probably give it 97 out of 100!

0 Comments
for 'Morbid Panzer - Only the Total Death'

No comments yet.
Leave a comment
for 'Morbid Panzer - Only the Total Death'

Leave a comment
for 'Morbid Panzer - Only the Total Death'