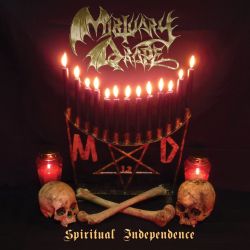 After the somewhat weird and controversial sound on their previous album, "Buried in Time", Mortuary Drape decided to ditch the experimental metalcore-y bullshit and return to their roots. The result is a very interesting album, with a lot of the old school elements that made them great on releases such as "All the Witches Dance" and "Tolling 13 Knell".

The riffs are incredibly Thrashy and catchy from beginning to end, and the overall guitar sound and tone is very well done. The drumming is incredibly similar to the drumming on "All the Witches Dance", which is a very nice thing indeed, since the more technical drumming style on other releases didn't sit well with the primitive riffs that well, in my opinion.

The bass lines are fantastic on this album (this band never had a bad bass performance anyway), and
The production is very crisp and keeps the balance between the raw early releases and the more modern sound on the previous two albums.

The fast riffs and solos on songs like "Lithany" and "Once I Read (Marble Tomb)" give a fantastic and memorable experience, and the more doomy and mid-paced songs like "Natural Death" provide some room for the fantastic bass lines to be heard.

The vocals here are one of the best performances ever from this band, and give a very haunting feeling similar to early Necromantia albums.

Overall, this album is a return to form for the band. Definitely check it out.

PeaceThroughAnarchy on 27th May, 2021
Trusted User - Lycanthropia.net - 160 reviews
Bang That Head That Doesn't Bang to Sarcofago.

MD never released a bad album in my humble opinion.
Even the "Buried in time" album is very good.
This album is by far their best release yet.