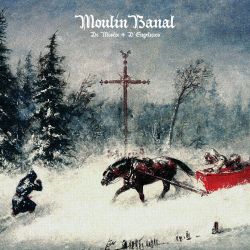 At first glance, this band may seem like another Forteresse / Metal Noir Quebecois wannabe band, but like the artwork, this album has a very strong French feeling to itself. Most notably Autarcie, Peste Noire, or Sale Freux.

The overall sound and feeling of the album is very tragic and melodic, with a little more raw production. Like the French bands mentioned above, the lyrical themes are based upon French history and nostalgic romanticism.

The overall atmosphere is very much like the many interlude, prelude folk songs on tracks like "Colonisez!", "Ma Sainte Croix", "Pourrir"... In other words, it creates a sort of image of a vast French countryside in the olden days. I must say, I don't much like the usage of folk songs in metal albums, but here they make the album more interesting.

The drumming is very nicely done (especially the cymbal work). The guitar sound is pretty raw, and the riffs are very melodic and folky (and usually tremolo picked).

Overall, a great release worthy of spending time on!

PeaceThroughAnarchy on 22nd May, 2021
Trusted User - Lycanthropia.net - 160 reviews
Bang That Head That Doesn't Bang to Sarcofago.

No comments yet.
Leave a comment
for 'Moulin Banal - De Misère & D'Engelures'