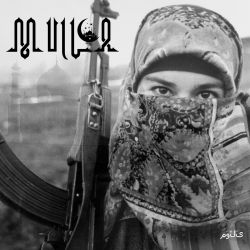 Hitting the Bull's-Eye on the Very First Shot!

Even though the Middle East has always been a troubled region, one thing's for sure; No country has ever encountered worse atrocities and hardships than Iraq. Since the 70s they have been in wars with just about everyone! Israel, Iran, America and so many other smaller wars (I'm not even going to mention any of the civil wars).

And as we know, Black Metal and other rebellious types of music are either wealthy and troubled kinds of art that come from the exhaustion of an easy, boring, depressing life, or the oppression and injustice of the authorities on outsiders!

Iraq would definitely fall in the latter category, but unfortunately there hasn't been much music coming from there (with the exception of the rather decent Seeds of Iblis). I have a feeling that Mulla is about to change that notion!

Formed in 2020, they made a very strong entry by releasing three excellent releases in one year. This is their first, and so far best release, in my opinion.

Unlike some other Middle Eastern bands, which have lots of folk instruments and even oriental song structures, Mulla has stuck to the formula of old School Darkthrone ("Transilvanian Hunger" era) and old school Russian Blazebirth Hall bands such as Branikald and Forest (although, in a very unique and Middle Eastern attitude!).

Apart from the final song, which is a guitar solo full of Middle Eastern folklore influences and arabic scales, the other songs are pretty much Raw Black Metal to the core. The atmosphere on the first track is pretty much Russian Black Metal coldness, but the majority of the time the album has a very evil and dark atmosphere.

As you would expect from an Islamic country, their lyrical themes are anti-islamic and contain lots of verses and chants from their Holy Book, Quran (which gives the album a very cool ambience).

The drumming is very crisp (although the double bass drums seem a bit high in the mix). As I said, the overall feeling and style of the album is Raw Black Metal, but thanks to some d-beat parts on the second and third songs, there is a bit of a Punk-y feel to it as well.

Overall, I strongly recommend that you listen to this and their second albums immediately! I hope that they inspire a new generation of Black Metal from our region.

PeaceThroughAnarchy on 30th May, 2021
Trusted User - Lycanthropia.net - 160 reviews
Bang That Head That Doesn't Bang to Sarcofago.

No comments yet.
Leave a comment
for 'Mulla - مَوْلَى'