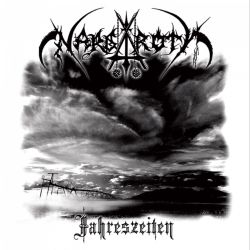 Good album by an awesome band that has a lot of good points and bad points at the same time.

The good points about this album are the riffs, and the insane vocals by Ash. There is a lot of emotion of all kinds in these riffs, more than any other Nargaroth album. The last 2 songs are the best, and are in my top 10 favorite songs by Nargaroth. Everything on these songs is perfect, other than the drums, which are one of the biggest bad points of this album.

But, there are a lot of bad points on this album. I will start with the the length. This album is really long, and it makes me feel bored by the end, even if the last two songs are the best, in my opinion. A bit more than 1 hour, it's too much for me, seriously.

Another big point are the drums. We have some bursts of double bass at many times, and a lot of the time they don't fit with the rest of the song. These bursts are really loud, so it makes the songs sound weird sometimes.

The last, and biggest bad point of this album, is the first song, "Frühling". The first time I listened to this, I was thinking that I was listening to the wrong album, that it was not Nargaroth. This song is one of the worst Black Metal songs I have heard in my life. But, like I said before, the two last songs are awesome, so that's why I put a score of 87 on this one, and it makes me sad because seriously, these songs are insane, but they have bad drums, and the two first songs are bad.

I recommend the album "Herbstleyd" instead, which is a lot better than this one. But honestly, if we remove the first two songs, and we put better drums, this album would be worth a score of 95 in my opinion. I hope you enjoy the first two songs more than me!

just brilliant, I hope the next nargaroth album follows in this style

I love this album

The only Nargaroth album I own. Probably their best too, I think.
2009 was a good year for this band.

i agree with you on the matter of drums, they sound a bit out of tune but i've never considered Nargaroth as a virtuoso! the important bit is always the feeling.

the first two songs sound a bit different (and quite happy on the case of the first part, the spring!) but thats mainly because this is a kind of concept album and it takes the listener to a journey into the 4 stages of a year and a lifetime in general. it starts a bit different. those first songs are there primarily to shock the listener by changing into a cold melancholic state of mind abrubtly. (this is my take from this album ofcoures, and it may be wrong!)

anyway, i think the only overrated Nargaroth album was the Prosatanica Shooting Angels. that pile of dogshit almost finished Nargaroth for me but this masterpiece saved it!