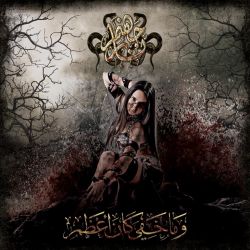 One more review is needed in order to make this album eligible for ranked awards
(Top 100 & Awards page).
83%

Unlike the previous release by this band, which had a very raw, deep, gritty production, this album has a more cleaner approach, and the symphonic/oriental parts are way heavier, making it feel almost like a symphonic metal band.

The focus of the previous album was mostly on the more gritty sounds, in a way that it felt like a doomy album, but this one is very much a groovy album.

That said, there are some gems here too if you like some harmonic stuff. My highlights would be "Rimal Al Zaman", "Ahlu Al Quboor" and "Sulaiman". The rest are not bad, but they sound cheesy at some points.

The biggest problem is probably the vocals, rather than the instruments. They are not as powerful as the previous effort.

All in all, a very enjoyable listen, but it could have been much better!

No comments yet.
Leave a comment
for 'Narjahanam / نار جهنم - وما خفي كان أعظم (The Tip of the Iceberg)'