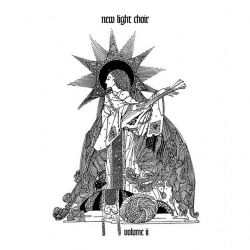 Most experimental Black Metal acts try and take the genre further and further into the future. This album somehow manages the opposite of that, by taking the genre to a long time ago when Black Metal didn't really exist!

Whether you like or hate the music of the 60s and 70s, you have to admit that their music was probably the final stage of progression, and anything that came in the 80s tried to regress that sound into a more primitive sound, or push it over that progression limit and make an overkill move and try and make something that many people couldn't understand or enjoy!

Some people may feel that this isn't "true" or Black Metal at all, but Black Metal isn't just the tremolo picking blasphemy with a lot of shouting and Hail Satan chants! This band is very interesting and unusual in its experiments. Some of the riffs are old school Venom / early Bathory, some are downright old school NWOBHM! Some solos even go further and sound like old school 70s Scorpions! The vocals are probably the least Black Metal aspect of the release (some may even call them Hippie vocals!).

The lyrical themes are very much based on 60s psychedelia bands, but I have to say, this mixture of lyrics and vocals really works (for me at least!).

The production is very crisp (arguably a bit too clean at some points) and every instrument sounds amazing on this album. All songs are incredible, and picking highlights is a bit pointless, but the 7th and 8th tracks are very memorable (especially with that old school riff!).

If you disagree with this review, you can give this album a listen and then you can write your own review or just write a comment to prove me wrong, but I strongly suggest you to listen to this album from start to finish! And it doesn't matter if you like Black Metal or regular Metal or hard rock or... If you like Music, CHECK this out.

It hurts me that no one gives a shit about this band! Talk about Underrated...!

PeaceThroughAnarchy on 16th May, 2021
Trusted User - Lycanthropia.net - 155 reviews
Bang That Head That Doesn't Bang to Sarcofago.

This is quite something.