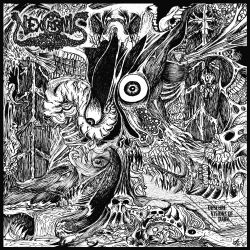 As I mentioned in some previous reviews, there has never been a good Iranian Extreme Metal scene. Over the years, there have been some tiny dots on the Extreme Metal map of Iran, but mostly, they have been rather generic and uninspired efforts, which is quite annoying for me! I think we should definitely have our own identity in Extreme Music.

This band is not that "Black" if i'm going to be frankly honest with you. Their music is mostly reminiscent of old school Technical Death Metal of the 90sm with some Persian Folklore influences on the guitar riffs. However, I think this album is a worthy contender in the story of Iranian Extreme Music Evolution.

First of all, the drums feel very artificial and synthetic. I'm not a drum expert, but I don't think this is a drum machine. I suspect these are triggered drums. Either way, this type of drumming can only be attributed to the 90s Tech Death bands, and it kind of kills the cool atmosphere of the guitar riffs if I'm honest. But overall, some intense and excellent drumming going on here.

The vocals are pretty cool too. They have this South American feeling to them. The songwriting is pretty weird and the production is crisp and clean, but the mixing (especially the bass and the drums) are REALLY weird in my opinion.

The biggest strength of this album is by far it's fantastic balance between the extremely technical riffs and the rather folklore-inspired primitive riffs, which gives this album it's uniqueness in my opinion. This kind of riffs remind me of early

Vader which had this rather obscure Death/Thrash vibe regarding their riffs. There are also some weird solos (on songs like "Dissolution in Vortex of Sanity" and "Murky Pits of Time") which have a bit of a

Overall, this is a very enjoyable album. I've been jamming it for some years now, and I still find it very fresh (which is high-praise for Tech Death Metal!). Alright, this doesn't fit into the usual Black/Death category, but it's sure as hell one of the best things from my country! I felt the need to promote it! If you like Death Metal, you can't miss this.

No comments yet.
Leave a comment
for 'Nex Carnis - Obscure Visions of Dark'

Leave a comment
for 'Nex Carnis - Obscure Visions of Dark'