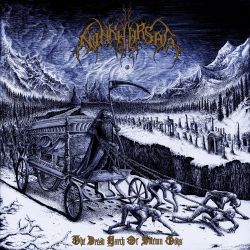 The Dread March of Solemn Gods

A dissection rip-off, or the reincarnation of Jon Nödtveidt, that is the question!

Many people slam this band (or indeed any slightly Melodic band!) for sounding like the mighty

Although there have been tons of Melo-Death and Melo-Black bands since the glory days of the Swedish Melodic Black Metal attack of the 90s, most of them failed to catch the same magic. I think we finally have a contender for that throne!

Ok, let's be serious for a little while! As I said, many people compare this band with Dissection, but this album reminds me of another of my favourites from that monstrous era;

Dawn. Especially their Slaughtersun album (which is high-praise for me! Even though I'm not that into melodic Black Metal anymore, I still jam some of the songs on that album almost on a daily basis! Most notably "Ride the Wings of Pestilence"). And the most interesting thing for me is the level of similarity between this whole album with that particular song! I don't know if it's a good thing or a bad thing, but for someone who never had enough of that song, it's great news! Good enough to consider this album as one of the best albums from the first half of 2021!

One of the first points that will catch your ears with the first listen, is the greatness of the vocal performance! Just wow! I've never heard a vocal performance which creates a perfect balance between total agony and melody (especially on songs like "Strigoi Diabolicum").

As for production, unlike the previous album, which put the guitars higher in the mix, here it seems that the drums were a bit higher than the rest. Though, no complaints on that matter, since the drumming here is excellent. Very brutal and unpolished.

The riffs are a mixture of old school 80s Thrash Metal, 80s Black Metal and mid-90s Symphonic / Melodic Black Metal (not Dimmu Borgir type of symphonic BM or Melodic Black Metal like Liar of Golgotha, if you know what I mean!). Also, the dual guitar sound creates a very raw and cold atmosphere too. It's also important to mention the grooviness of some riffs, but don't be fooled to thinking this is groovy in the Pantera fashion!)

The bass lines are quite cool too. They remind me of old school NWOBHM bands (which is (again), HIGH-Praise!).

Overall, if you're a fan of old school 90s Swedish Melodic Black Metal, you have to have this in your collection. It's nice to hear a great throwback album to the magnificent acts mentioned above. Modern metal musicians that pretend the 80s and 90s didn't exist and mock people who put their music in that old school frame, are stupid! Just know your heritage! I've read somewhere that the goal of this band was to "create cold, majestic Black Metal in the classic, unspoiled style of old". If that's so, well done brothers! You've done it with this one!

0 Comments
for 'Ninkharsag - The Dread March of Solemn Gods'

No comments yet.
Leave a comment
for 'Ninkharsag - The Dread March of Solemn Gods'

Leave a comment
for 'Ninkharsag - The Dread March of Solemn Gods'