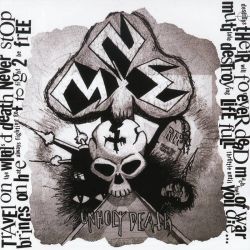 A heavier, more scary and more dirty version of a Venom live show!

NME's sloppy musicianship in the early days was an intentional result of being too fucking BM rather than being shitty musicians! Their later career showed us that they can be quite professional, but those albums are not the NME that everyone in the Underground loved!

This album, and the first NME demo, are among the most obscure pieces of music EVER written. And for once, this obscurity was genuinely intentional. The vocal performance, the haunting chants and some of the drumming are reminiscent of early

Venom. If you like the Venom style of Speed/Black Metal, look no further! This album perfected what Venom was trying to achieve. In many ways, it's far better than any Venom album, even though it's incredibly primitive.

If you play these guitar riffs and bass lines with a modern production, this will probably be the ultimate Exciter worship! It's the EXTREMELY obscure sound of this album that transfers it from a regular 80s Speed Metal act into something more obscure than Bathory's "The Return......"!

Highlights? Fucking impossible to choose! Throw a dart at any of them. As I said, the musicianship here is extremely primitive, and you can't really look at it as some kind of perfect album, but when you listen to it you can get that Black Metal feeling even on the most meaningless noisy parts!

Sabbat when they want to name a band that captured the magic of Venom, but in truth those bands can be considered Tame and Pop rock!

Seriously, the words "True" and "Cult" were invented for this, and not for Mayhem or even Darkthrone! This is the Black Metal equivalent for Fuckin' Death by

Death Strike. It didn't invent it, but it defined what it is better than anything that came before or after!

Overall, listen to "Stormwarning / Blood and Souls" or "Warrior" and if you haven't started a Satanic ritual in less than five minutes, then I'm sorry but you are not a Black Metal head!

No comments yet.
Leave a comment
for 'NME - Unholy Death'