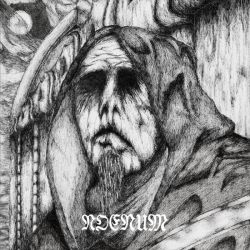 Although Noenum hasn't released many albums (in fact, they have only released this EP!), they have captured the melancholy of early Burzum in a majestic way.

Fans of Burzum (especially the first four albums) know that Burzum's music is the border between classic Black Metal and depressive Black Metal that developed in the mid to late 90s. This EP's feeling is very much the same.

The riffs are incredibly cold and melancholic. Add to that the fantastic, desperate and helpless vocals, and you end up with one of the most depressing albums ever!

The drums are very tightly performed, and the bass drums can be heard clearly beneath the loud mix of the vocals and guitars (oh boy, the early Burzum similarities keep on coming!).

The highlight track? Well, it's very difficult to choose only one song, partly because all the songs are incredible, but mostly because there are only four tracks that feel like one big synced song. However, the final epic song stands out a little more, thanks to its mesmerizing melodic riff (that's the Finnish way to do it! Making a melodic riff without moving far from the raw, true sound of Black Metal!). What a fantastic way to end an album (and so far, a whole discography!).

All in all, this EP is criminally underrated, and you must listen to it once. Believe me, if you like the primitive, raw, melancholic sound of early Burzum, you will replay this album immediately like I did! I wish this was a full-length with more songs!

PeaceThroughAnarchy on 12th May, 2021
Trusted User - Lycanthropia.net - 160 reviews
Bang That Head That Doesn't Bang to Sarcofago.

No comments yet.
Leave a comment
for 'Noenum - Black Esoteric Evangelium'