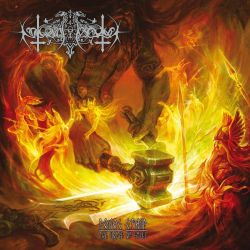 To begin this review, I want everyone to know that Nokturnal Mortum is more than a black metal band, they are some genius of the music industry and this album is the proof. In this review I will explain why I think this album need to be more recognized as a masterpiece of the music industry and not just a fucking good album, even if some of the song are a bit disappointing.


In contrary to what im doing normaly, I will look at all the song by one in this review instead of looking at the entire album. Firstly, the intro of this album is insane. Just in the intro, you can see that you will have more than a simple pagan black metal album. You already have pagan and wind instrument playing by the great Saturious who put you in a awesome mood. It completely feel like you are in Valhalla haha.

After, the first song, Voice of Steel. It's one of the greatest song that I have ever heard. Everything is insane, the ambiance, the guitar riff, the folk instrument, the voice of Varggoth, everything. It's pagan black metal at its best. There is even a little guitar solo at the middle of the song who fit perfectly with the rest, a thing that is rare in pagan black metal like this. And seriously, it should be call progressive black metal too because honestly, it's never repetitive. And not just for the first song, when you arrive to Valkyrie, what is probably the most known and for me the best song for all features of this song for it complexity as much as the quality, you completely fall into progressive stuff.

At the start you might say its totally a normal black metal song but wait, you will see. When you arrive to 16:50 of the album, you heard something totally unpredictable. A fucking classic rock solo. It's AWESOME. These freaking genius decided to put a classic rock solo inside a pagan black metal song, how can you not be impressed? Not only the solo is good, but the bass line behind it is insane. And then come the scream of Varggoth and then start another solo, and after, some touching ( I don't find the right word to express what I want but in French it's "émouvant" ) voice arrived with so much emotion than you can't not be touched by them. To be 100% honest, I have listen to a lot of music in my life but never found something like this.

And after, another insane son. In the pagan genre it's probably the best that I've ever heard, Ukraine. The use of the folk instrument in this song is insane and the guitar riff too. The clean and screamed voice are also insane in this song. Honestly, I have not a lot of thing to say about this song other that, everything is perfect.


Now, My Dream Islands. The song is far to be bad, but I will say less my genre, especially after the first third of it. The song is becoming a bit disappointing. It's also probably because after 3 killer song this one seems more shitty. Still, I count this song as a bad point.

The second "bad" song of the album is By Path of The Sun. This is the type of song that in my opinion should not have been released. It's extremely disappointing. It's a bit repetitive and the riff are far to be good.

Sky of the Saddened Nights is like a nowhere song in the album in my opinion. The clean guitar riff feel like Italian folk music, when I was in the mood of pagan cult and stuff like this just before. It's the only really bad song in my opinion. But, it's normal to have some weak song in a 1h10 long album.

BUT, the album finish by a good song, and it comes to save the album because without this ending song, I would never had call this album a masterpiece. White tower is more atmospheric than the other song, but it still has is place in the album. And we are going more far from the black metal normal stuff but that's what makes this album that good. The riffs are good, the vocal are insane and the drums are perfectly adapted to the song.


So, to end this review, I would say that even if there is yes 2 bad song and 1 a bit weak, this album still a masterpiece to me for it complexity. The 3 first song are just indescribable. This is clearly one of the best album in all black metal and by far the greatest in the pagan subgenre. These guys are extremely talented musician and this album is the proof of it. So, hope you enjoy this review and see you on another one!

The best Black/Folk album I have ever heard

Nokturnal Mortum is known for their ideology, and many people are hesitant to listen to them. I decided to listen to their last three albums, and I was fascinated! I like their way of mixing Black Metal and folk music, and the result is perfect.

I can't decide which track is the best of the album. In my opinion, "Voice of Steel" is their best work, and this album is the reason I listen to pagan/folk Black Metal these days, such as Goatmoon, Kroda, Graveland, etc...

Do not hesitate to listen to them because of their political ideology, because music is music, and music doesn't manipulate you. And of course, the lyrical themes of this album don't include any political expression.

Give it a chance, and you will love this album! I rate the album 95 out of 100, so as not to look excessive.

holy fuck this sounds so much better than their other stuff

This album is infinitely better than pretty much all the other albums on the top 100 list. It's in a league of it own. Listened to a bunch of the top rated albums here and was completely underwhelmed.

THE best pagan black album, nothing else to say. brillant musician with extreme talent

Nokturnal Mortum in the news