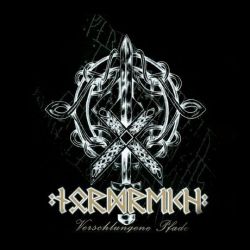 Nordreich is one of the overlooked names among the Pagan front bands. Their early demos and first albums were incredibly true to the early Burzum/Graveland sound, but because of their poor production, they are not that recommended. However, in 2007 this band finally found it's sound, and made two stellar releases in the same year! That album ("Auf Heimischen Pfaden") is very much another recommended album, but since it is not as original as this (some songs sound like a Storm/Isengard rip off!), we'll just focus on this album.

The overall song structures on this release are mid-paced to slow songs, in the same vein as early

Burzum, although many people will compare this band to

Bilskirnir. I'll probably agree with that, but I think on this album they made something unique that is hard to compare with other bands.

The production on this album is bang on. Crisp, clean, but very atmospheric and nature driven (also epic as fuck!). The guitar tone is incredibly thick and heavy, the drumming is very tightly performed, and the vocals are the usual German Black Metal rasps done well.

The riffs are incredibly catchy, and at some points they become Thrashy and old school (which is badass!). On some songs, like the incredible "Verfall", the bass is over the top and sounds like an old school Finnish Death Metal bass line.

The lyrical themes are very much German Paganism and pride. Some people will pass on this because of some labels such as NSBM, but I think that's the biggest bullshit ever! This album is just fantastic. Thats it!

All in all, this album is incredibly overlooked and underrated, and you should definitely check it out.

PeaceThroughAnarchy on 27th May, 2021
Trusted User - Lycanthropia.net - 155 reviews
Bang That Head That Doesn't Bang to Sarcofago.

No comments yet.
Leave a comment
for 'Nordreich - Verschlungene Pfade'