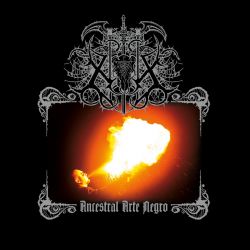 This Raw Black Metal band was born in 2012, the first NOX lineup were Seth, Iscaroth and Morbus, who just managed to release a recorded work in 2014 in split format. "Blasphemous Proclamations from the Abyss" was the split with the south american bands Tzelmoth, Dagon and Ancient Serpent. Already in 2015, they released the long play on compact disc "Manifestaciones de la Eterna Noche". For non-Hispanic speakers, I commented that the lyric part of the Ancestral Arte Negro abounds in references to darkness, malignancy, occultism, Luciferian rebellions and ancient chaos. "Esperando la muerte" changes the trend toward a more existentialist and desperate soul, who live waiting for death and the final of this eternal torment called life.

Classic Black Metal claiming the raw sound of the 90's, this band from Medellín, Colombia, reappears with these four songs EP in 2016 with a different vocalist from their previous productions when Morbus acted as the vocalist. Quayin Rex annihilates us with his harsh cries of pure evil in the 7 "EP – "Ancestral Arte Negro", and Morbus concentrates absolutely on the execution of drums.

This 7"EP vinyl was produced by the American Forever Plagued Records label, a limited edition of 300 hand numbered copies, each copy accompained by an 7"x7" insert. This four tracks where recorded between Nox and Nebuloza Studios. Essentially the whole recording was done with tuned strings in E standard, with a work of traditional tremolo picking in much of the production because of the 90s style of the band that is far influenced by the old Norwegian Darkthrone, Immortal and Gorgoroth, a relevant aspect in the band's music is its nostalgic but rawness melody in every song, in other words it is melodious with swift and nostalgic passages, a piece recommended to the lovers of an ancient Dark Medieval Times, yes, but subtracting the keyboards.

Production deadly noisy for the lovers of the hateful and clandestine Black Metal that existed in the past, however, it is noted that despite being a South American band, the sound is not amateur, much less a rehearsal sound, it is an absolutely professional work, with a clear bass, vocals and guitars and potent sound. The Morbus job in drums is effective and furious, fast drums with half-time passages, with a great game of cymbals and an interesting performance of the toms. The EP ends in the best way with "Esperando la Muerte", where the bass player shows us his best side; it can listen Álvaro Alvarez (from Masacre) performing the keyboard chorus, without becoming annoying to the ear, and in vocals we hear whispers, grim, sharp voices, and his horrible screams in the Aaskereia, Nyktalgia or Austere best style. It can be affirmed that it is not a work that pretends to be original, or to be revolutionary in the Black Metal genre, nevertheless those who seek darkness and dark roads will find them in Ancestral Arte Negro.

excellent issue of this EP, one of the Colombian bands with the most radical sound and rawness, QayinRex debuting as a vocalist in NOX showing one of the best harsh vocals of Colombian Black Metal ever