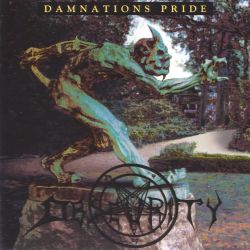 Obscurity was one of the earliest examples of Swedish Extreme Metal bands which followed in the footsteps of Bathory, Possessed and Hellhammer. Alongside other small bands like Morbid and Mefisto, they made a huge impact on the development of Death Metal and Black Metal in general. The first three Obscurity demos (well, the first two for the most part!) are some of the lesser known influential Underground Black Metal releases from Sweden.

Although the first two demos are hugely important, and they deserve to have separate reviews for themselves, we'll just stick to this compilation, since it has a better sound quality and also includes the two incredibly rare songs from the 1992 demo.

The first four tracks are from the second demo, titled "Damnations Pride". Out of the three demos released by this band, this one has the best production by far. The riffing style here is mostly chaotic Thrash Metal riffs in the veins of old school Brazilian Thrash bands (like early Sepultura, Vulcano, Holocausto). The only different song is "Mortal Remains", which has a somewhat mid-pace thrashy riff. The vocals here are incredibly haunting and obscure (especially on the title track, "Damnations Pride". Seriously that is scary!).

Tracks 5 and 6 are from the forgotten demo from 1992. They are easily the weakest songs here, and they sound more in tune with late 80s and early 90s Swedish and Florida Death Metal bands. The production is not that great, but the riffs are very cool indeed. This said, the riff on "In the Watches of the Night" is BADASS!

The remaining tracks are from their first and most primitive demo. The production is not that bad, but the guitars sound a bit too fuzzy. The vocal performance is still very great, but not as badass as the second demo. The riffs here are very much full-on Thrash Metal (unlike the second demo, which had a bit of early Possessed kind of Death Metal feeling).

One more thing to mention. Is the drumming, which is pure Bathory! One would assume that this band had the same drummer as in Bathory's "The Return......"! All this said, apart from the drumming, this band has little resemblance to other Swedish acts from that erA hey sounded pretty unique for their time.

There are lots of highlights but my personal favourite must be the extremely obscure "Mortal Remains".

Overall, a very essential first wave band that should be remembered more often!

PeaceThroughAnarchy on 25th May, 2021
Trusted User - Lycanthropia.net - 155 reviews
Bang That Head That Doesn't Bang to Sarcofago.

No comments yet.
Leave a comment
for 'Obscurity (SWE) - Damnations Pride Compilation'