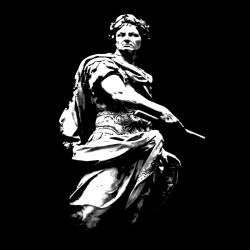 Influenced by and risen from the ashes of old school 90s USBM bands like Profanatica, Accursed, Judas Iscariot and perhaps more obviously Grand Belial's Key, Odium Totus started to add some of the epic Pagan / NSBM soundscapes and lyrical themes to the USBM scene.

Their first album was fairly decent, but to be honest it sounded a bit uninspired and unoriginal. At most points, it sounded like a copy of Judas Iscariot. However; on this album, Dyingnysus (the main member of the band) took over the bass and drums, and turned this into a one man band.

I have to say, the drumming and bass lines are not that great here, but the overall atmosphere, the guitar layers and the vocals are Barbaric!

On this album, there is an apparent desperate Polish Black metal influence too. The riffs and the songwriting have a lot of Mgła feeling to themselves.

A strong point of this album is the incredible reverb-stenched guitar solos on songs such as "The Milksop Herds" and "All Debility Cleansed", which are very well put together. The overall guitar sound is a tad bit too raw and barbaric, but the overall atmosphere is very interesting.

Most of the songs here are fast and tremolo-picked, but there are some epic slow and mid-paced moments too (which are my personal favourites, like "Multitudes of Prostration").

Overall, if you like the old school USBM bands, and you think they need to be more pagan and epic, this is a very nice listen indeed. Recommended.

PeaceThroughAnarchy on 28th May, 2021
Trusted User - Lycanthropia.net - 155 reviews
Bang That Head That Doesn't Bang to Sarcofago.

No comments yet.
Leave a comment
for 'Odium Totus - In Inceptum Finis Est'

Leave a comment
for 'Odium Totus - In Inceptum Finis Est'