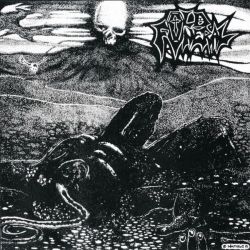 (Not just because of Varg's presence!)

Old Funeral was one of the earliest Norwegian extreme metal bands. At the beginning, the only bands from Norway were Mayhem, Vomit, Darkthrone, Cadaver, and a couple of really small underground acts. People always remember Old Funeral as the band where Varg, Abbath and Demonaz started and nothing much more. Wrong!

Even though the early demos of the band were not that great, this EP is a fantastic old-school Death Metal album. At this point, Abbath and Demonaz were out of the band, and for people new to Norse extreme metal, the only familiar face here is Varg.

But we should not forget about Tore and Padde. The guitar duo of Varg and Tore created a beast, a fantastic gritty sound with great riffs. The production, in the usual Grieghallen fashion, is fantastic. Seriously, what a pure sound!

The most interesting song here is "Incantation". I mean wow! What a great underground anthem. It's a shame people associate this band with it's members, and not it's music!

If you like Death Metal, you should definitely give this a shot! You will not be disappointed. Underground Death Metal at its best.

No comments yet.
Leave a comment
for 'Old Funeral - Devoured Carcass'

Old Funeral in the news