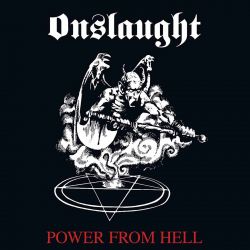 Onslaught begun as a Discharge-worshiping Hardcore Punk band with some decent demos in the early 80s, but it was in 1985 that the band moved towards another, more interesting direction.

On "Power from Hell" they started to shift away from their Punk origins, and move on towards a darker style. Although you can still feel some of that Punk DNA on songs like "Steel Meets Steel", the majority of the songs are full on Speed/Thrash Metal with great riffage. All of the riffs (and I truely mean all of them) are catchy as hell and memorable.

The great riffage doesn't make this album a great Black Metal album though, that'll be the extremely obscure atmosphere. The overall sound of this album sounds like a mixture of "The Return......" by Bathory and "In the sign of Evil" by Sodom (also a bit of "Seven Churches" by Possessed).

The vocal performance on these early Onslaught releases has always been extremely evil and impressive, but don't expect a raspy Quorthon vocal performance. This said, the vocals have a kind of King Diamond feeling to them.

My favourite song from the whole thing (and this band in general) is the badass "Lord of Evil". Seriously guys, this song itself deserves a 100 percent rating on it's own! (Especially towards the end where it goes berzerk)

The only little pitfall of the album is the two-part instrumental, which is too repetitive at some points. The rest are insanely overlooked.

Needless to say, this album is one of the most overlooked albums in the whole genre. Although the majority of releases by this band have little Black Metal appael, this album is certainly among big names like "To Mega Therion" and "In the Sign of Evil". HIGHLY RECOMMENDED!

0 Comments
for 'Onslaught - Power from Hell'

No comments yet.
Leave a comment
for 'Onslaught - Power from Hell'