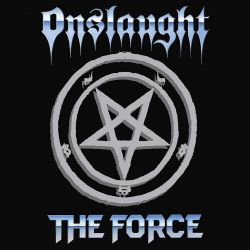 1 Review for
'Onslaught - The Force'
'The Force'

The second album by

Onslaught is much more technical compared to the primitive first album, but it still has a bit of old school Satanic Thrash Metal feeling left in itself. After this album, the band changed the lineups and turned into an straight Thrash Metal act, but on this album they showed us what they could do one last time! Unlike the first album, which had an early Sodom, Bathory feeling to it, on this album they move towards less obscure Thrash Metal types. One can hear lots of resemblance with early Slayer, Kreator and even non-satanic acts like Exodus.

The production is much better compared with the previous release, but this has altered some of the atmosphere and charm of this album. This said, the riffs are so badass and haunting that you won't notice anything.

On songs like "Flame of the Antichrist", you can hear a lot of that old school Slayer/ Bathory blasphemous sound, but all in all this album isn't as fucked up as the previous effort. Sure, as a Thrash Metal album, this is probably up there with legendary stuff like "Kill 'em All" by Metallica...

My highlight song is easily the insanely underrated "Metal Forces". What an absolute gem. The riffs, the solos, the vocals, are borderline perfect here. This said, the rest of the songs here are incredibly badass. No filler all killer!

Overall, this album is another criminally underrated album by this band. These two albums were mostly overshadowed by massively inferior releases like "Reign in Blood" simply because of better distributors and publishers! Do yourself a favor and listen to these first two Onslaught albums.

Although, the rest of their discography is nice too. The third album had a fantastic vocal performance by Steve Grimmett, and the albums recorded after the reformation of the band have been incredibly consistent. Even the latest album, released in 2020, was badass (which is more than what we can say for the majority of 80s bands that are still going today!)

Buy
'Onslaught - The Force'
'The Force'

0 Comments
for 'Onslaught - The Force'

No comments yet.
Leave a comment
for 'Onslaught - The Force'