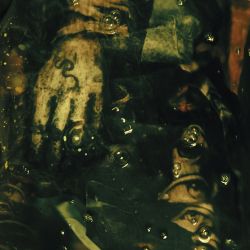 Oranssi Pazuzu's psychedelic, nightmarish soundscape is one of the most impressive efforts in Avant-garde Black Metal history. Their early works were very much the best examples of what is known as Psychedelic / Acid Black Metal, however; on the last two albums they seem to be shifting more towards the psychedelic parts, and the whole sound of the album starts to move away from Black Metal. This said, this album is still far from bland and boring!

The most noticeable change here is the increased amount of electronic soundscapes used. At some points, it sounds like old school German Ambient/ Krautrock Music (like the start of "Uusi Teknokratia" which is almost identical to Harald Grosskopf's "So Weit, So Gut"!).

The overall guitar sound and tone is much heavier than anything they've put out before. Even though there are not so many interesting riffs (as in most experimental acts!), the overall production and sound of the album is something to behold!

The change in melodies and harmonies on the songs are incredibly sudden. If you want to shock yourself multiple times, go ahead and listen to this!

Overall, this album may be the most inaccessible album from this band's discography, but the incredible amount of madness in the composition department makes this a worth-while listen.

As for highlights, I can't really pick a whole song, because almost every song here has lots of annoying parts! There are some that stuck to my mind like the weird part that starts at around 5:00 on "Oikeamielisten Sali". It's just a euphony of nightmarish lost-in-space atmosphere (and shattered ear drums!).

On my top 20 of 2020 list without a doubt.
Don't expect your run of the mill album,
This carves its own sound and ideas...