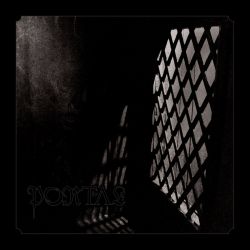 Although their music is closer to the classic Death Metal of the 90s, the overall cosmic/occult-driven atmosphere of this album comes closest to Avant-garde Black/Death bands such as

I'm not going to fuck around with fancy words or shit like that, this album is KILLER. I genuinely got scared to death with this one! The atmosphere is not cold, or dark, or anything like that, it's the most EVIL shit I've heard in years. The riffs and the guitar sound on tracks like "Catafalque" sound like a bunch of wild insects trying to drill a hole into the listener's brain and its ingredients!

It's really difficult to describe the atmosphere that this album creates with its vocals and guitar sound, since there aren't many comparison points with other bands (or even other albums by this band!). They have created a new dark realm of their own with this badass MF! If there was a movie about hell directed by Satan himself, this would definitely end up as the OST!

The production on this album is on pro level! Thanks to the stripped guitar tone, the guitarists go berzerk, and play at ungodly loud and obnoxious sound levels. The drum sound is relentless, and fucking amazing. At some moments, the drums are totally removed to let the guitars create that desolated atmosphere that I mentioned above. When I listened to this album for the second time, I realized that the sound is diminishing as the tracks go by. The most brutal and aggressive song on the album is probably the first song, and after that the album starts to slow down a bit to create this incredibly hypnotic cosmic effect towards the final songs (which sound like atmospheric drone/noise songs mashed with some really loud guitars!).

My favorite must be the song on the middle section of the album, which has a badass, memorable guitar sound. Also, let's highlight the vocals while we have the chance! I've never encountered such a beast-like sound in my life. And I should also highlight the fact that they managed to create a very memorable album with not that many memorable riffs to offer! (note to the Avant-garde Black Metal bands of today!). You should listen to this album with just the anticipation for the evil atmosphere, not riffs, solos or any particular parts (it just works as a whole package).

Overall, this album is truly a torture to the ears and the brain! I've rarely encountered madness like this. If you can take the relentless punishment of this album, you will discover a new evil, painful and desolate palace in the infinite cosmic space. This is not a pleasant experience. If you want meditative sounds, don't bother with this one. This is only for the fucked up ones! Recommended.

This is one of the best albums of 2021 so far, and it sort of dethrones Yoth Iria for me!

No comments yet.
Leave a comment
for 'Portal - Avow'