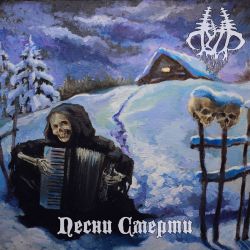 Let's get something clear from the beginning; I'm not a fan of this so-called Post-Black Metal. I like some post-rock bands, but the idea of Post-Black Metal is a bit silly in my opinion, since it captures the technicalities of Black Metal without the feeling of Black Metal. I've tried to listen to some big names like Alcest, Sólstafir, etc... But I found them a tad bit boring to be honest! However; this album just blew me away with its cold and melancholic atmosphere.

What makes this album great in my book is the fact that they eased on some of the technical features of Post-Black Metal albums and focused more on making a cold, atmospheric Black Metal album with some Post-Metal influences.

The guitar riffing is by far the biggest strength about this album. They are incredibly melancholic and melodic. They almost remind me of old school Burzum rather than say, Mogwai!

As for the controversial accordion, I don't get why people are so critical of other instruments. They should remember that Windir used accordion on albums like "Arntor" (you can't get more "true" than Valfar!). Anyway, the accordion creates an extra layer of atmosphere which is totally fine by me.

The vocal performance is incredibly Barbaric and aggressive, which is also totally fine, but I think it would have been better if it was a bit lower down the mix.

PeaceThroughAnarchy on 27th May, 2021
Trusted User - Lycanthropia.net - 160 reviews
Bang That Head That Doesn't Bang to Sarcofago.

Finally got round to listening to this. It's nice, heavy, not some cheesy folk bullshit the cover might imply. Good vocals, great guitars, minimal accordeon, and the few times it does make an appearance its appropriate and with nice tone

you've outlined this album very nicely and precisely my friend!