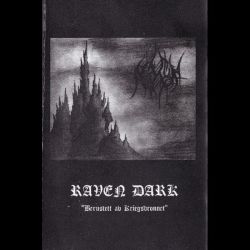 A forgotten gem from the glory days of Blazebirth Hall!

Everyone has a favourite Metal scene, whether it is the Florida Death Metal, Norwegian Black Metal, Bay Area Thrash Metal, and so on. I'm a fan of all almost of the scenes from the 80s and 90s. The 90s "Blazebirth Hall" scene of Russia is by far one of my favorites. They didn't really innovate the Black Metal sound, but their melancholic yet epic sound, which was mostly inspired by their love of their Folk music and early 90s primitive Norwegian Black Metal bands like

Darkthrone (mainly the Transilvanian Hunger era), was and still is spine-chilling.

Most of the bands on this scene sounded almost exactly like the other bands on the scene (mostly because of the fact that their members were the same couple of key guys in the scene, like Kaldrad and Ulv Gegner Irminsson). In that case, I would compare this band to early

The album starts with a very authentic old school Transilvanian Hunger-style riff. Even though the songs on this album go on for a bit too long, their almost-Ambient approach to minimalist repetition does create an almost hypnotic feeling (by the way, the first song would be my highlight if I had to pick just one song).

"Enteared av Dreamhorizont" and "Blinded by Idollight" sit on the same structure as the first track, with some minor differences in the riffs. In this sense, it encapsulates the formula of the Transilvanian Hunger album, where the songs stick to a strict monotonous formula, and don't really change much throughout the album!

The two instrumental Ambient/Folk songs on here ("Над всполохами рассвета" and "квозь погребальное пламя") also create an intense sense of darkness and melancholy. They are instantly distinctive of those days in the Blazebirth Hall (although the last song reminds me of the demo version of "Channeling the Power of Souls into a New God" by Burzum).

The most interesting song on the album is by far the Pagan Metal anthem of "For Glory Hat". On this song, the album briefly turns into

Graveland worship, and gives us that indistinguishable Russian sense of Epic-ness and marching!

Also, on that song Kaldrad showcases his famous Russian style of clean folk singing instead of the usual harsh Black Metal vocals. Many people find that clean vocal approach cheezy and Power Metal-y, but I have to say I almost wet myself with excitement every time I hear that magnificent bastard's epic singing! Rest in power.

The production is pretty crisp compared with other recordings of this band (and most of the bands on the scene!). It gives an incredible sense of darkness and lost-in-nature kind of vibe.

Overall, even though this album is not very impressive when it comes to musicianship and songwriting, the dark atmosphere is almost unmatchable! It's a classic and y'all should start treating it like a classic!