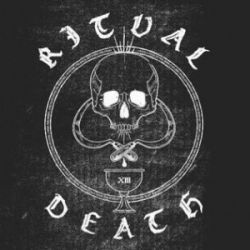 The debut Ritual Death release is a very weird release indeed! The noise/ambient interludes and layers scattered all over the EP give the album a haunting atmosphere.

The vocals and guitar parts are pretty much the standard old school Death Metal approach, with some Black Metal twists coming from the War Metal acts instead of 90s Norwegian Black Metal. The only unique and different part about this is the usage of Noisecore and ambient influences that I mentioned above. The keyboard parts give a fantastic dark atmosphere without crossing into the Symphonic branch.

The drumming has a lot of cymbal blast beats, which is a bit weird for this type of sound, but I have to say I love it. However, let's stop beating around the bush, and say the important bit. The guitar tone on this album is INCREDIBLE! It's one of the heaviest and most gritty and dirty guitar tones I've ever come across. There is quite a lot of feedback and reverb here which makes it incredibly obscure.

The first two songs are not perfect, and the guitar tone sounds a bit thin compared to the rest of the album, but boy oh boy, those last three songs! Just WOW! The vocal performance is another strong point of this album. He just kills it on all songs!

Overall, if you want to have a nightmarish, different kind of Black/Death in your collection, this is the band to go for!

PeaceThroughAnarchy on 27th May, 2021
Trusted User - Lycanthropia.net - 155 reviews
Bang That Head That Doesn't Bang to Sarcofago.