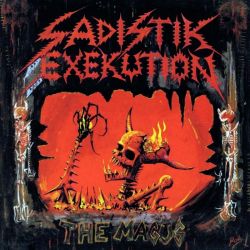 When people talk about War/Bestial Metal, they automatically think of the legendary Finnish band Beherit, or Blasphemy from Canada (give or take a few other projects), but rarely do people talk about Sadistik Exekution. This band is one of the few that captured the essence of early Sarcófago, and one of the early pioneers of Blackened Death Metal and War Metal.

Their debut album, "The Magus", is a very obscure release by all means (probably their most obscure yet). The production is almost borderline awful, but as in "The Return......" album by Bathory, sometimes the obscure production creates an even more obscure atmosphere!

One of the things that people regularly mention about this album (and moan about!), is the fact that the guitar tracks seem to be from different sessions on different songs. That's maybe true, but it's not a big noticeable difference either way, since they all sound badass! It doesn't make it sound like a compilation album.

The drumming on this album is very well performed, and primitive compared to other Death Metal acts from that time. They pound underneath the mix perfectly.

My highlight of the album must be the incredible "Cautness Darling Blood".

In short, this album is incredibly underrated, and very much the first War Metal album ever (the recording date goes back to the 80s!). It's a must have in anyone's collection.

No comments yet.
Leave a comment
for 'Sadistik Exekution - The Magus'