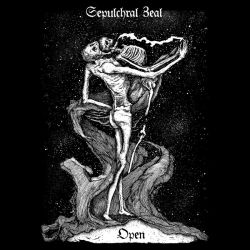 The first (and so far only!) release by Germany's Sepulchral Zeal, is truly jaw-dropping! If you thought Bølzer's Aura was badass, wait and see what these German boys have in store for you!

Even though it's a demo tape, it sounds incredibly crisp. The guitar tone and riffs are simply devastating. The atmosphere is epic and space-y.

There are only two songs, so let's not waste time with highlights and technical shit, and say that this is a badass releases from the first second until 16:59.

I hope that they'll put out a full-length soon, because I'm starting to lose my mind since I've listened to this so many times! It's a must have for any Black/Death fan.

And by the way, for me this is probably as close as it gets to a 100 percent rating, but since it's so short, I can't really give more than a 90.