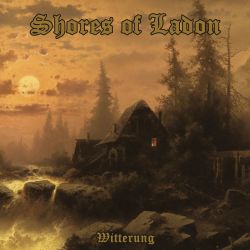 A beautiful and melodic version of the raw black metal formula

First of all i want to start my "Review" with a Public Announcement kind of introduction. I took a long break from discovering new music and the humble opinion expressing that came along with it. Generally for the most part of the past year i have listened to nothing but the classics from the 80s and 90s and 2000s (haven't listened to almost any new album from late 2021 untill now!). On my last review way back in 2021, i wrote about what i thought was (at the time) "My favorite album from 2021" which was the amazing "Submission and Slavery" by the American band

"Lamp of Murmuur". Even though i did listen to some other 2021 albums that came after that particular album but none were special enough to replace it, until this beast of an album came along to my attention recently! so, here's my final pick as the 'album of the year 2021' (albeit with a huge delay!). After all, 2021 was a great year for Black Metal. Lots of great records by both new and well-established artists were released that should not be forgotten.

For the majority of people outside of Black Metal (=or indeed Extreme Metal and underground music in general), our Love Affair for this genre of music is a premature act which is doomed to be grown out of as soon as we pass a certain age or social status. Maybe that's true, but thanks to albums like this, this music stays as a passion for me (rather than another short phase). The artistic musical expression of albums like this one is a kind of devastating cathartic force that only the great artistic forms can allow themselves to express!

Shores of Ladon. I first got acquainted with this band years ago (2017 probably) when i discovered their rather interesting debut "Eindringling" (retroperspectively). In essence it was a rather Finnish Black metal inspired album with a lot of emphasis on nature and darkness (i know! i know! not reinventing the wheel on both fronts!) after that rather nice acquaintance i kinda forget about this album and band altogether untill very recently where i came across this, the follow up to that album by accident.

Just like the forementioned previous album, this album does not really create something totally new to the Black metal sound! but don't let this put you off of this album! this record has everything any soul would look for an album when it comes to Black Metal. We'll get into the details right now but in a short sentence; this album captures what i love about German BM without adding much or taking away much from it; The primordial expression of the anger that dwells in their Teutonic souls (and souls of each of us elsewhere to be frank!). An anger which is a symbol of the dark side that is an integral part of the human being.

In my opinion, the biggest strength of this album is it's vocals. Simple as that. The distant, alien screams tears the skin and soul like an incandescent blade! it helps creating the beautiful yet melancholic feeling that the occasional uses of Violin means to create.

Speaking of the violins, the occasional yet well executed violin parts on this album are provided by no one other than "A.D.D." who you most probably will recognize from her role on bands such as

The overal production and sound approach is that of a raw, melodic approach. Sometimes it’s super fast and then changes to stomping mid-tempo moments. It's better to describe the sound of this album with 4 words; ferocious, ice cold, instinct and glorious!

On some occasions, the melodic nature of the album reachs an epic level to an extent which there‘s even a glimpse of Viking/pagan/neo-folk melodies incorporated to the riffs! simple but amazing detail that needs acknowlegment.

On top of everythin, it has an amazing album cover. Reminiscent of the works of the great German-American artist "Albert Bierstadt". Though, i highly suggest that you apply the "Don't judge a book by it's cover" philosophy while consuming this product! it's not an easy-listening meditation mood. I'ts a very raw album that will become meditative after a few listens (probably!).

Although this album would best work as a 50 minute tight listen, i would probably pick the fifth track "Sirenen Sang" for it's amazing melancholic violin intro and the riff that follows it through.

Overall, if you are a fan of Raw, Primitive Black Metal, you would probably enjoy all 50 minutes of this album the way i do. "Witterung" is black metal poetry. A kind of poetry without concessions or paraphernalia of any kind! it is perfection and one of the most authentic releases in recent years.
Recommended!

0 Comments
for 'Shores of Ladon - Witterung'

No comments yet.
Leave a comment
for 'Shores of Ladon - Witterung'