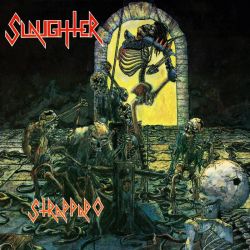 1 Review for
'Slaughter (CAN) - Strappado'
'Strappado'

Slaughter was one of the most underrated acts related to the first wave / 80s Black Metal scene. Most people remember this band as Chuck Schuldiner's first band (he did contribute in the early days of the band), but people, you should not just look at it that way. This band released one of the most evil Black Metal albums of all time.

On first listen, you will definitely hear a lot of Hellhammer / Celtic Frost, or even some of the less obvious bands like Poison (Germany). The atmosphere does remind me of "The Return......" by Bathory, there is the same kind of obscure but professional production. One thing that this album surpasses the mentioned names in, is the drumming. Fuckin' hell! The drumming on this album is incredible. One of the best 80s drumming performances ever! Primitive but effective!

The guitars sound incredibly dirty and thick (much like "Seven Churches" by Possessed), and the solos are bad-fuckin'-ass!

The best song of the whole thing must be the incredible "Parasites" (with that dirty riff), although, most of the songs have the same initial riff and sound similar. The doomy efforts of "Tortured Souls" and "Nocturnal Hell" are other highlights of the album.

This said, you should listen to all the songs on the album, whatever the cost. It's an essential album all around, and people who haven't listened to this can't call themselves Black Metal heads!

PeaceThroughAnarchy on 18th May, 2021
Trusted User - Lycanthropia.net - 155 reviews
Bang That Head That Doesn't Bang to Sarcofago.

0 Comments
for 'Slaughter (CAN) - Strappado'

No comments yet.
Leave a comment
for 'Slaughter (CAN) - Strappado'