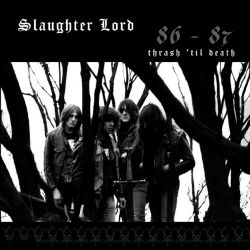 Love's a bitch? Try metalheads and critics who don't show love for stuff like this, they're much more bitchy!

The current Australian Black Metal scene is one of the strongest scenes ever, but back in the 80s, there were virtually no bands going for more obscure metal sounds (or indeed anything other than AC/DC!). This band was probably the first Extreme band to come out of the land down under! Their original demos are incredibly rare (even on the internet!) so we will focus on this excellent compilation.

First of all, the songs are almost randomly spattered around the album, so I will not waste time on saying which song is from which demo. The only interesting point is about the last two songs, which are the only studio recordings.

The first thing that people with Slipknot t-shirts will immediately say is that the production sucks. But let me tell you one thing; the fucked up, obscure production on these demos (and the studio recordings) is the main attraction for me. Not even Bathory managed to sound this evil!

The biggest strength of the album (and let's be honest, it's an unmissable quality!) is the INCREDIBLY catchy and thrashy riffs on display. I get why most "normal" metalheads and Thrashers hate Black Metal and all kinds of primitive metal, but good God! Name another band with more catchy riffs and solos. I'll be waiting!

The drumming is pretty primitive and un-technical (!) but that's the way it should have been. It helps to boost the evil atmosphere of the whole album. Also, the bass is pretty inaudible thanks to the beautifully ugly production and mix!

The vocals are probably the most "Black" thing about this album (not as in skin color... Just the black that makes regular metal "Black"!). They are incredibly badly recorded raspy vocals. I don't really understand what he is saying (or even what language he is using!) but goddamn, that's a very obscure and scary vocal performance.

All this said, the riffs and extremely well performed solos (not retarded Slayer solos haha!) stole the show on every second of this unbelievably underappreciated masterpiece. Riffs and solos like these will make you forget every little problem and deficiency and become a fanboy!

Highlights? Fucking hell! It's really difficult to choose, but the song "Taste of Blood" makes me wanna harm myself! Also, I love the song "Steel Lords of War" which starts with a VERY beautiful acoustic intro, and then suddenly goes to full attack mode, and even has one of the best solos I've ever heard.

Overall, if you like old school Thrash Metal with a little more badass attitude than groove (yeah, Anthrax sucks ass!) you cannot miss this. For me this is up there with "Under the sign of Black Mark" by Bathory (true!). This was very influential for the underground bands of the late 80s and early 90s (if you don't believe me, look for random photos of Fenriz and spot a Slaughter Lord logo vest almost instantly!).

No comments yet.
Leave a comment
for 'Slaughter Lord - Thrash 'til Death'

Leave a comment
for 'Slaughter Lord - Thrash 'til Death'