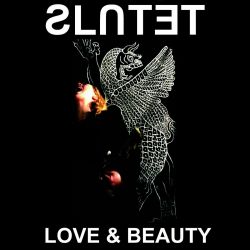 Don't be fooled by the hippie album title!

After releasing a bunch of extremely obscure, psychedelic influenced demos, Slutet finally released their debut last year. Although most people regard this as an Avant-garde release, I find this album to be a very Old School album (almost a throwback album!). Yes, there are some psychedelic elements like in the demos, and there is a bit of ambient here and there, but I don't find this album particularly Experimental. This said, I couldn't have been happier with the final result! What a kick-ass album.

The biggest strength of this album are the vocals in my opinion. The vocals sound fuckin' insane! They sound like they were recorded inside a torture chamber filled with a bunch of clinically insane people! Although they remind me a bit of Lifelover's vocals, I think this is a very unique and interesting approach to them.

Psychonaut 4. This said, the raw Black Metal sound presented here is much more chaotic than the aforementioned names, but this chaotic sound is not the part that makes this unique compared to the other names in Depressive Rock/BM. This album manages to be extremely chaotic and raw while being EXTREMELY melodic! Just listen to the third track and you'll know what I mean!

The drumming is incredibly tight and powerful beneath the mix. The guitar sound is extremely lo-fi and raw, but it doesn't sound like a bedroom DSBM band. Even though this album is extremely long, I've never had the urge to skip any parts. It's all killer no filler here guys! Almost every song is 15 minutes long, and it never repeats the same riff too much.

Overall, I think this album is one of the best in recent times. I don't find it that experimental to be honest, but as a classic Black Metal sound this is A-Grade Black Metal!

I don't have a highlight song here, since they are all badass, but I can point at the vocals as the highlight of this album! Recommended.

Hey thanks for the review! We honestly enjoyed it. Do us a favor and throw it up on Metal Archives too if you feel like it.

Glad to hear that. Thanks for the kind words.
cheers!