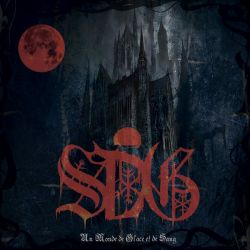 Doesn't reinvent the wheel, but tries to perfect the existing wheel!

I was a huge fan of "Moonrise in Total Darkness", and some songs on the first album (like "L'Éternelle Majesté des Montagnes" and "Onward into the Crystal Snows"). They somehow captured the essence of the fast, cold soundscape of the Swedish and of course 90s Norwegian acts. However, after that album, I started to lose interest in the band. Somehow, the magic and the epicness was gone, and the band started to sound like a Monarque copy! (probably because of change in direction from symphonic to primitive Black Metal). When I heard about this release back in 2020, I naturally ignored it! But after a friend's recommendation, I decided to give it a shot, and boy oh boy, what a pleasant surprise!

The first thing that hits you when you listen to this album is the production. It's not as raw and cold as "Moonrise in Total Darkness", but everything sounds a bit tighter and more professionally done.

The guitar riffs are reminiscent of old school Satyricon, Borknagar and other top-shelf Norwegian Black Metal bands from the 90s. That's not very special, however; the way it's done is very much impressive. The riffs are incredibly melodic, and cold (which is quite difficult to pull off in my opinion), the drumming is by far this album's biggest strength. Even though it feels a bit non-organic at some points, it reminds me a little bit of early Satyricon drumming by Frost. This said, because of a MUCH better production, we can hear it in a better way.

Also, it's nice to mention that the Necromantia cover song here kicks ass! At first I didn't recognize it (since I didn't check the tracklist) because it was so well blended with the overall sound and atmosphere of this album. I finally recognized it when that legendary solo kicked in!

The rest of the songs are very well written (even the outro is quite nice).

Overall, this exceeded my expectations, and actually surpassed "Moonrise in Total Darkness". I hope they continue in this direction in the future.

PeaceThroughAnarchy on 25th May, 2021
Trusted User - Lycanthropia.net - 160 reviews
Bang That Head That Doesn't Bang to Sarcofago.