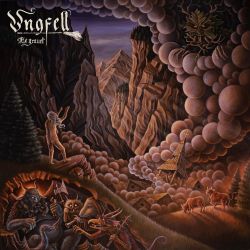 The Swiss Peste Noire is developing it's own sound.

After the somewhat mediocre (but rather nice), Peste Noire plagiarism of the debut Ungfell album, the second album brought a kind of unique approach. Even though that album was not that original or groundbreaking, it was interesting enough for me to wait for further releases.

The lyrical theme here is still about Swiss folklore. The overall riffing style is still very melodic (albeit with a little more harmony than before). Also, there is not that much repetition, and the songs are still not that long or overlong. There are even more folky parts here, almost in between every song there is a full-on folk song (which is surprisingly nice, and creates a lot of images in the listeners head, especially on songs like "Stossgebätt (Wie das Wyb Als Häx Hygrichtet Wird)").

The guitar tone is pretty warm, and the drumming performance is pretty tight. The bass is surprisingly audible (having in mind that there are so many layers of vocals and guitars in the mix). Overall, the production is very crisp and on point.

All in all, a huge improvement over the previous albums. Recommended!

What a beautiful cover