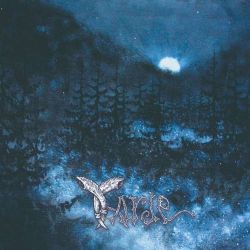 Varde is sort of a Black Metal mini-supergroup, formed in 2017 (well, two of the three members were session musicians for some well-known bands, such as Tvangeste and Dødheimsgard).

Alright, the mini-supergroup was an unfunny joke by me, but what I'm trying to say is that these guys had some musical background with some excellent bands, and this EP is a kind of proof of this involvement. On the first look I thought "Oh well, here we go! Yet another Norwegian Neo-Romantic Black Metal band with a beautiful album cover and 20 minutes of Satyricon and Ragnarok worship". But no! Actually, this album does sound quite unique and killer to be honest.

Although we have only two songs here, the songs are quite different from each other, and there is a kind of different style between them. The first song is much more folklore-influenced, and relies mostly on slower parts with more melody and atmosphere, as opposed to the 90s Black Metal worship standard witnessed on the second track. The first song's folklore influences create some beautiful melodies without getting boring (which is quite an achievement taking in mind it's length!).

The vocals vary too. At some moments, it does sound like Satyr, on other occasions it does actually sound quite a lot like

Forest! There is quite a bit of Norwegian folklore singing going on too (especially on the first song), which does remind me of Grutle from

The experimentation on this album is quite nice too. There is a bit of acoustic guitar involvement, which creates some beautiful intervals between the riffs. The keyboards are incorporated really nicely as well, they don't intervene that much, but they fill some of the intervals between the riffs that would have been empty without them. The acoustic, ambient, folklore parts prevent this album from becoming a 23-minute long monotone, repetitive album.

Overall, this album was one of the biggest surprises for me, and actually managed to create a unique sound (which is getting harder and harder to achieve these days!). Recommended!

No comments yet.
Leave a comment
for 'Varde - Asgaardsreien'