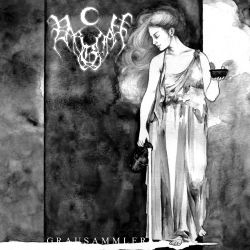 A beautiful type of grimness!

After the legendary 90s, the Scandinavian Gods of the genre started to fall apart and lose most of their appeal (for me at least!). That's where the German Black Metal scene came to the rescue!

German Black Metal is very much the most interesting Black Metal scene of the post-90s (again, IMO!). There are so many great bands from the fatherland that some superb acts are lost between the countless great releases! (like this band).

When you first start to listen to this album, you will be blown away with how the cold, melancholic riffs and vocals are done in such a beautiful and melodic way. It's literally best of both worlds. Some people may compare this band to Alcest because of it's melodic and rather accessible production and soundscapes, but in my opinion this band is the essential band in the list of bands that capture the magic of Ulver (as you may have guessed by the band name!). Technically, this band is not that similar to Ulver musically, however, the whole feeling of the album is reminiscent of early Ulver.

As instruments go, the bass is extremely well done on this album, and it has those raw, fuzzy types of bass-lines that remind you of "Det Som Engang Var" era of Burzum. The type of bass lines that you feel rather than hear! The Guitars are ON-POINT! Beautifully in tune and tightly performed.

The drums are less successful though, at some point (like the title track) they are incredibly out of tune and loose. This said, you won't feel these little problems because of how great the songwriting is. "No filler all killer!".

My highlights for this album would be "Weltverloren", "Grausammler" and "Allein in mir" (in that order), though I can't find anything wrong with the other songs!

All in all, one of the best albums from more recent times! Highly recommended.

No comments yet.
Leave a comment
for 'Vargnatt (DEU) - Grausammler'