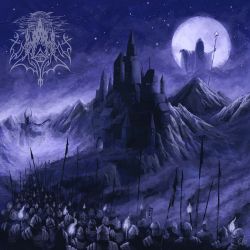 Most people would probably suggest Dimmu Borgir as the essential Emperor-influenced band, but for me Vargrav is the only band that captures the essence of "In The Nightside Eclipse" / "Anthems to the Welkin at Dusk". The first album was a very good album, but this one is far more atmospheric and majestic. We can thank the keyboards for this added atmosphere. On this release, the keyboards are incredibly high in the mix, and they create the perfect majestic night scenery (arguably better than Ihsahn's Works!).

The guitar riffs are mostly the usual tremolo picking in the veins of the 90s Norwegian Black Metal sound, however, there are some thrashy and catchy riffs too (like in the second part of "Crowned By Demonstorms").

The best song of the whole album must be "Dark Space Dominion", simply because of that berzerk throwback riffage that starts at around 2:25.

Another great aspect of this album is the cover art. It's not a very important aspect, but it makes everything more authentic.

The only shortcoming with this album is probably the fact that it's too authentic in emulating Emperor, and it crosses into plagiarism territory!

Overall, it's not a very original album, and it certainly doesn't invent anything new, but it's one of the better options if you have a thirst for the 90s Symphonic Black Metal sound!

No comments yet.
Leave a comment
for 'Vargrav (FIN) - Reign in Supreme Darkness'

Leave a comment
for 'Vargrav (FIN) - Reign in Supreme Darkness'