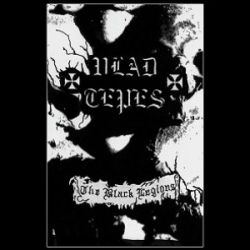 One more review is needed in order to make this album eligible for ranked awards
(Top 100 & Awards page).
81%

Most tribute albums are mediocre at best. The biggest problem with tribute / cover albums is that they perform songs from the favourite bands from their youth (that you've probably heard before), and by doing that, they ruin the magic of the original song, even if they perform it in a better way.

However, this tribute album is somehow different, since these guys are actually paying tribute to their peers! Almost all of the French underground Raw / depressive Black Metal bands of the 90s (aka Black Legions bands) stayed underground, and not that many people actually paid any attention to them (ignoring their influence on DSBM and Raw Black Metal!).

One of the best things about this album is that they performed these songs very tightly. Almost all of them sound better than the originals, and because they were peers, they sort of had the same kind of attitude towards the performance, recording and production. The Belketre songs in particular are very much improved, since Belketre's original recording quality was shit! Here you can actually hear some of the riffs.

The most interesting (and probably the least known) band on the list is Brenoritvrezorkre. The song in question, "Voarmérpébre Uatr Vèrmyapre", has a really badass primitive feel to itself.

Overall, even though these are not original songs, they do sound original, partly because they do not sound very different (because of the production) than their originals, but mostly because they are paying homage to very underrated and underground acts that not many people have heard of!