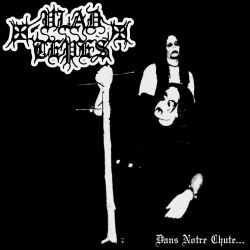 One more review is needed in order to make this album eligible for ranked awards
(Top 100 & Awards page).
73%

One of the rawest releases ever!

Well, in my previous reviews for other Vlad tepes releases, I talked about the general aspects of the band and its releases. Like the previous stuff, the biggest problem here is the production. You can't really like a song if you can't hear anything! This one is by far the rawest album in this band's catalog.

Even though some of the parts work (like "Nos Terribles Pensées"), you have to admit the majority of these songs are way too raw and inaudible. Maybe they have great riffs, but who knows. You can't hear it!

The highlight of the album is by far the intro track. A slightly modified version of "Wladimir's March". To some extent, this is what that song should have been in the first place.

All in all, even though some parts really work well with this sound, the majority of the songs don't, and some of the songs are not even that interesting (like the final song which is just moaning!). Some songs sound like old school Hellhammer / Venom demos, but they somehow lack something.

PeaceThroughAnarchy on 10th May, 2021
Trusted User - Lycanthropia.net - 160 reviews
Bang That Head That Doesn't Bang to Sarcofago.

No comments yet.
Leave a comment
for 'Vlad Tepes - Dans Notre Chute'