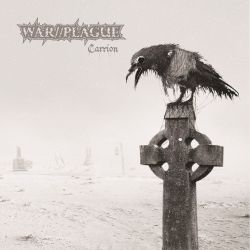 No preaching Crust Punk here, only Black/Thrash anthems with a little protest!

The second release from the incredible War//Plague continues in the same direction as the previous masterpiece, with some minor improvements.

The attitude and the lyrical approach is pretty much the same, with lots of angry, pagan rebellions and protests (with a hint of decline of mankind), however the Pagan Metal approach is more visible (through songs like "The Fog").

The drumming here is at its peak. People forget the role of an organic drum sound these days, but it's nice to see that some bands still care about their drumming.

The guitar tone here is MUCH more sludgy and heavy than the previous effort (good god, that's heavy as fuck!), and the riffs are much more memorable than before (to a point where the songs sound like anthems!).

The songwriting here is much more complex and progressive. The songs sound like dirty Sludge Metal songs at some points, but a few seconds later they transition into a beautiful Black/Thrash Attack! At other points the songs sound like old school New Wave / Gothic rock bands! Or even some old school Death Metal on songs like "Insomnia".

The production is as perfect as it was before, and everything is very crisp and perfectly done.

Overall, this is probably the best Crust related album I've heard in a LONG time! Recommended.

PeaceThroughAnarchy on 28th May, 2021
Trusted User - Lycanthropia.net - 155 reviews
Bang That Head That Doesn't Bang to Sarcofago.

No comments yet.
Leave a comment
for 'War//Plague (USA) [α] - Carrion'