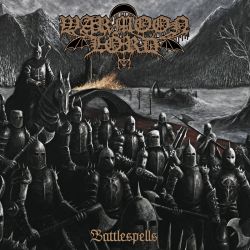 Proof that not all keyboard-driven albums suck!

As I have mentioned many times before, I've always had a soft spot for Finnish Black Metal. Whether legendary acts such as Horna, Satanic Warmaster, Goatmoon, Sargeist, or lesser known projects such as Noenum... They have a certain quality to their music that is immediately identifiable. It's easier to describe the music of other countries such as Norway (which almost always sounds cold!), but the overall emotion on Finnish Black Metal acts is a bit more complex. It's way more epic than any of it's neighbouring country's music, and there is a tinge more of melancholy.

Enough of my boring lecture, let's get on to this amazing new addition to that Hall of Finnish Black Metal greats! Warmoon Lord is a one-man band formed around 2018 by Juuso Peltola (which is as always fascinating considering the quality of the music!). The name (which is inspired by a

Vlad Tepes song) might mislead some people into thinking that this is another Raw Black Metal band trying to rip off the Black Legion legends, but actually this band sounds like most Old School Finnish Black Metal bands, with a little more focus on Melodic/Symphonic ideas.

The first thing that I noticed on this album were the exceptionally well-executed keyboard parts and passages that gave an EPIC atmosphere to the mix. These keyboard layers are (in my opinion) the most unique aspect of the album. They combine the darkness of early day Symphonic bands like

Other than the keyboard parts, there aren't many original and new ideas to discuss. The riffs are a combination of fast tremolo picked parts and some more mid-pace Epic/Melodic riffs (alongside those exceptional keyboards!). This guy has been in lots of different bands over the years, and it kinda shows. He was in a doom metal band and a traditional metal band, which is a great start. You can feel that old school DNA in the music on display here. Also, since we mentioned his previous projects, it's important to mention his other side-project, Old Sorcery. That is a very decent Dungeon Synth band, and I think part of the great keyboards on this album are the result of his experience on that project.

The drums are the usual blast-beats, but they are tightly performed. The bass is pretty much drowned by the scorching guitars (except the intro song, which is doomier and you can hear the bass very clearly). The vocals are typical Second Wave growls and shrieks with some occasional pretentious "beast-speech" vocals!

Highlights? Well, I can't really pick one song, as they are all very decent. "Oracles of War" is probably the most old school song here, which even has some

Bathory inspired parts. The intro is a very beautiful little piece, and "In Perennial Twilight" is probably the most 90s inspired song. The rest are equally good, though.

Overall, this album doesn't really invent much new, but if you're into old school Symphonic Black Metal with a crisp and clean production and a rich keyboard layer (stuff like the first two

Emperor albums or the second

Dimmu Borgir album), you should definitely check this out! The keyboards on this album create an absolutely insane atmosphere (without being cheezy and opera-ish!) and I think it's worth a listen just because of this quality!