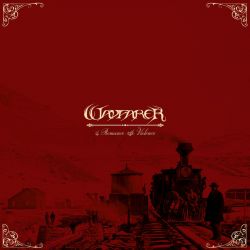 A Romance with Violence

After the excellent "World's Blood" released back in 2018, I was eager to hear the follow-up for that album with high anticipation. And although this album showed a bit of a shift away from the previous album, the end result didn't disappoint me one bit!

The overall details are pretty much similar to the previous three efforts, but there are some minor changes that make this album sound much more old school and metallic.

First of all, unlike the previous albums, we have an actual intro song with piano and folk instruments, which is a very nice touch and helps to paint the picture depicted on the cover art. Also, there are some clean vocals added on some parts which add a certain old school feeling to it (especially on "Fire & Gold" or "Masquerade of the Gunslingers"). There is other new stuff too, like some old school guitar solos (on tracks like "The Iron Horse (Gallows Frontier, Act II)").

The biggest change on this album is the increased amount of melody and harmony in the riffs. This band had better overall atmospheric songs and soundscapes, but never had they had such tinge of melody in their work. Almost all of the riffs are memorable and feel refreshing after all the repetitive, atmospheric riffs of the previous albums.

The drumming is just as well performed as before, albeit with a bit more progressive vibe going on. There are less blast-beats or double bass going on here (which is refreshing). The vocals are almost a throwback to the first two albums by this band (which is a small step down compared to the incredible vocal performance on the 2018 release!).

The production is just as great as it always has been, but the bass sound is somehow higher on the mix. The bass lines are (much like the drumming) less intense. The folklore influence of this band is less visible here, but the riffs have some incorporation of Americana and folklore to them.

Overall, this band is always trying to change some details with every single release they have, and it's much of the same here. This album is much more progressive than the previous efforts, and thanks to some ballad-like clean vocals and folk-y instrumentation, this is by far their most accessible album yet.

This is not as good as the previous album, but I'm feeling that they didn't try to recreate that type of art again with this one. This sounds more like an improved version of the ideas on the first two releases. Recommended.

Highlight: The final epic track, "Vaudeville", which has a country and western vibe to itself.

0 Comments
for 'Wayfarer - A Romance with Violence'

No comments yet.
Leave a comment
for 'Wayfarer - A Romance with Violence'

Leave a comment
for 'Wayfarer - A Romance with Violence'