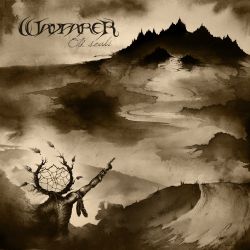 The second Wayfarer album pretty much continues where the debut left off. The lyrical themes, the vocals, the rhythm section, are all pretty much the same as before, however; there are some minor changes. The guitar sound is a tiny bit higher in the mix, and the overall guitar tone is a bit more gritty and thicker compared with the previous effort. The song lengths are pretty much shorter than before (thankfully!), there are only two songs that go over the 10 minute mark. However, unlike the previous album, all the songs here have a bit more progression as they move forward, and they don't just repeat the same riff over and over!

The riffs themselves are much more catchy compared with the debut, and some of them even have a late 90s, early 2000s

Immortal vibe to themselves! (in my opinion of course!). The drummer of this band has been playing in some superb Death Metal acts such as

Blood Incantation, and you can hear some of that here. The previous album's drumming was a bit drowned in the mix, but on this album there is some excellent tom work on the drum front. It's still the same kind of simplistic, monotone drumming as before, but you can hear some almost-tribal beats which add to the atmosphere of this album. The bass work however is not as badass as the previous album, but thanks to the fantastic production, it is still just as audible.

Overall, this is still not a groundbreaking album, but thanks to shorter songs and better riffs, it is a major leap compared to the debut. Recommended.

No comments yet.
Leave a comment
for 'Wayfarer - Old Souls'