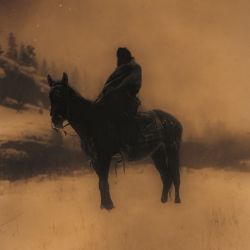 In one word: UNIQUE.

In my previous reviews for the first two Wayfarer albums, I mentioned that this is one of the best albums that captured the essence of great U.S. Atmospheric Black Metal bands, such as Agalloch.

Although the first two albums were great in their own right, they weren't the albums that made me fall in love with the band. I discovered this band in 2018 with this incredible album, and then listened to the previous two albums retrospectively. As I said, those two albums were great, but they were both flawed due to problems like length, too much repetition, and lack of decent riffs on some songs. On this release however, they fixed all the minor issues, and perfected the strengths of the previous albums in an incredible way! Looking back, this was one of the absolute highlights of 2018 (probably top 5!), and having listened to it today after a long time, I still found it magical!

Right, enough with embarrassing romantic gestures towards the album! Let's get to the bottom of this thing:

Unlike the previous albums, there are only five songs here, and three of them are epic post-10 minute long songs, with fantastic progression as the songs go along. The two short songs are just as effective as the epic songs, though.

As I mentioned before, I was a huge fan of the bass work on the first album, and here it's pretty much the same thing going on, and thanks to a superior production you can sense it even more. The drumming was always great with this band, but on the previous album there was a bit too much focus on the toms. Here though, there is quite nice cymbal work as well. Overall, the same kind of repetitive drumming, with the usual Tribal attitude. But don't expect fancy drumming! It's still very primitive and repetitive (as it should be on Atmospheric Black Metal albums).

The biggest improvement (and boy oh boy, isn't it a massive one at that!) is the fantastic guitar tone. It's much more dense and thick, and the riffs are much more diverse compared with the previous albums which had a single style on the whole album. On here, there are some Doom-y elements considering the riffs, and there is some fast, high tremolo-picked, more aggressive riffing as well (and even some Death-Doom elements!).

Another improvement is the increased involvement of acoustic passages and intervals in the songwriting, which adds to that almighty atmosphere. The vocals on the previous albums were not that groundbreaking to me, and I found them as Agalloch style rip-off! (a good copy but a copy nonetheless!). Here though, the vocals are much deeper and mournful.

Overall, this is one of the best American Atmospheric Black Metal albums, and it can only be compared with top-shelf albums, like "Kentucky" by Panopticon or "Ashes Against the Grain" by Agalloch (although in my opinion, this album blows both of them out of the way!).

No comments yet.
Leave a comment
for 'Wayfarer - World's Blood'