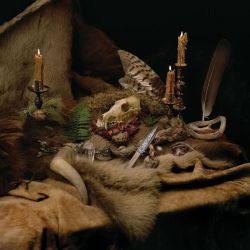 4 users have collected this album

Wolves in the Throne Room

Wolves in the Throne Room can be considered as one of the frontrunners and most important names in the Cascadian Black Metal scene. Their first album is one of my all time personal favourite albums to listen to during winter time. For me, they lost some of the magic by each subsequent album that followed,
And after listening to their 2014 album, I lost my interest in the band completely. However; in 2017, they showed a huge leap forward by releasing "Thrice Woven" which surprised me (in a pleasant way!) and I might even call it a superior album to their debut (at least musically!). This sudden change may have something to do with their line-up changes, but either way, that album became my second album from them that I truly loved!

And now, after almost 4 years, the trio have come up with a great follow-up. The first impression that someone might get from the first listen is the fact that this album is less Melodic/Atmospheric/Folk oriented and more straightforward old school Black Metal (especially in the case of songs like "Masters of Rain and Storm"). I can really get lots of "Hvis Lyset Tar Oss" vibes from listening to this album and I think that is a high praise! Songs like "Through Eternal Fields" go one step further in the business of straightforwardness and even enter the realm of Catchy-ness!

The production on this album is bang-on! (This band usually has a perfect production anyway!) The guitar sound is incredibly rich and performances are incredibly tight. There aren't as much folk / ambient instruments involved (which is a great decision!). The vocals are quite powerful.

My personal favourite song out of this album must be the EPIC "Masters of Rain and Storm". This song is easily one of the best songs I've heard in 2021.

The album closes with an ambient song (which sounds a lot like their debatable 2014 full-length), but I have to say this one closes the album in a beautiful way. Also there is a bonus track on some versions which can be considered as an alternative ending but I prefer the "Eostre" track as an ending track.

Overall, this is a very cool album and is definitely a contender for the best album of 2021. Alongside

Panopticon's "...and Again into the Light", this is the biggest highlight of the year so far. We don't know it, but we might be living in the Renaissance of Cascadian Black Metal!

0 Comments
for 'Wolves in the Throne Room - Primordial Arcana'

No comments yet.
Leave a comment
for 'Wolves in the Throne Room - Primordial Arcana'

Leave a comment
for 'Wolves in the Throne Room - Primordial Arcana'

Wolves in the Throne Room in the news