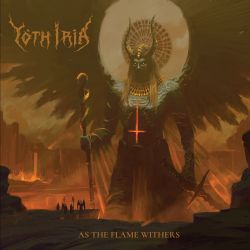 As the Flame Withers

As I mentioned on my review for the EP that came before this release, the Greek sound has always been a very unique scene compared to the other scenes. I was very excited about the collaboration of two old guards which were a part of legendary acts such as Rotting Christ / Necromantia / Varathron. The EP was hugely appealing, and very exciting, but it wasn't enough, so finally I had the chance to listen to the full-length that I was looking forward to!

The overall result is very good indeed. They didn't disappoint! The production is very clear, and the mix is pretty much perfect. Even though it's heading dangerously towards a modern metal sound, it still provides that Greek sound DNA! The style is pretty much a mixture of old school metal, traditional Doom Metal and old school Black Metal, but one can sense some 70s prog influences too.

The first song is a very intense song stenched in blast beats and tremolo picking (probably the least Greek sounding song on the album!).

The self-titled track and "Hermetic Code" get closer to the Hellenic 90s sound, but weirdly they both reminded me of the Filosofem era of Burzum! (probably because of the almost identical, minimal keyboard layers and the epic slow riffs)

The fourth track is probably the doomiest song here. This song almost sounds like a ritualistic version of Black Sabbath's "Sabotage"! Also, it reminds me of Hammerheart by Bathory (this is by farrrr my favourite track here! What a banger!).

The fifth track is a fast song, reminiscent of NWOBHM classics, with a fantastic melodic guitar work. The sixth track is very much a full-on melodic Black Metal track, and the seventh track is the most catchy and thrashy track here. The last part of the song is the most Hellenic moment of the whole album. It almost sounds like a Rotting Christ song from the early 90s.

The final track is very much a gothic Black Metal song similar to the stuff on the third and fourth Rotting Christ albums.

Overall, this didn't meet my expectations fully (after those two amazing songs on the EP!) but this is by far the best album of 2021 so far (until Darkthrone comes along of course!).

8 Comments
for 'Yoth Iria - As the Flame Withers'

unfortunately not on Vivo Música

Although it early here is the album of the year.

Best album for years. Includes Jim Mutilator (Co founder of Rotting Christ), The Magus of Necromantia and Thou Art Lord.

Monumental. Such a great variety and passion had years to be heard. Black metal stretched its limits.

So far ,the best BM album of this year